It's Not About Getting What We Want: Homily for Palm Sunday in the Orthodox Church 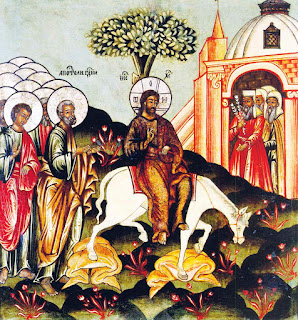 
As He hung on the Cross dying, this Messiah prayed to the Father for the forgiveness of the religious and civilized people who thought that killing Him was a godly and patriotic thing to do.  We cannot understand that kind of love rationally, which is precisely why we need Holy Week.  We need to enter into the deep mystery of our salvation so that we will not reject our Christ in His Passion, but instead follow Him faithfully.  That is how we will prepare to embrace the unfathomable joy of His great victory from the depths of our souls throughout this blessed week.   “Hosanna! Blessed is He Who comes in the Name of the Lord, the King of Israel.”