How to Respond to Contemporary American Culture with the Humble Faith of the Centurion: Homily on the Fourth Sunday of the Matthew in the Orthodox Church


And why should they?  If we do not become living witnesses of a blessedness beyond the customs of mainstream culture, then we will have failed to manifest the joy of a Kingdom that calls all people to become who God created them to be in His image and likeness.    With the humility of the centurion, let us be faithful witnesses of what our Lord’s mercy can do with even the most unlikely guests at the heavenly banquet, including sinners like you and me.
Posted by Father Philip LeMasters at 7:37 PM No comments:

Eyes Full of Light: Homily on the Remarkable Forgiveness Shown by the Mourners of Charleston on the Third Sunday of Matthew in the Orthodox Church 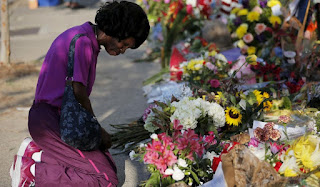 "Follow Me" Applies to Us All: Homily for the Second Sunday After Pentecost in the Orthodox Church 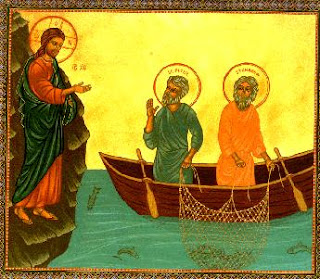 Posted by Father Philip LeMasters at 2:05 PM No comments:

Link to Podcast of Homily for Sunday of All Saints

Sunday of All Saints

June 10, 2015 Length: 10:36
Our contemporary culture forms many people who cannot imagine any purpose higher in life than the pursuit of self-centered pleasure on their own terms. Fr. Philip LeMasters explains that on the Sunday of All Saints, the Church reminds us that we are called to follow a very different and much better path.
Posted by Father Philip LeMasters at 4:24 PM No comments:

On Taking Up the Cross and Confessing Christ in Contemporary Culture: Homily for the Sunday of All Saints in the Orthodox Church 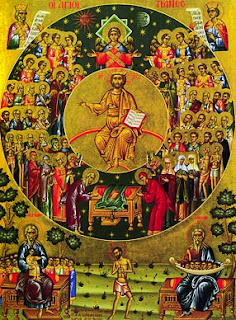 
Posted by Father Philip LeMasters at 1:50 PM No comments:

What is the relationship between morality and the Eucharist? Do our actions, outside of the church building, define who we are in Christ? Essentially, does our bodily relationship with self and others affect our communion with the Other? These are the issues addressed by Fr Philip LeMasters in his book, Toward a Eucharistic Vision of Church, Family, Marriage and Sex. Given that “same-sex unions” is the hot topic of the day, this review will center on chapter six of the book.
Midway down the opening paragraph of the chapter, “An Orthodox Response to ‘Same-Sex Unions,’” we read: “The question of Christianity’s proper stance on homosexuality is the most controversial and divisive issue facing churches in North America today” (p.79). This is a quote with which few Christians can quibble. Fireworks among foes and arm wrestling among friends might be found further down the page:


There is no question about the teaching of the Orthodox Church on homosexuality; namely, sexual relations between persons of the same sex are “sinful and contrary to God’s will. Orthodoxy maintains the living Tradition of the Church on the question of homosexuality. The Scriptures, writings of the Father, lives of the Saints, and the Liturgy provide no basis whatsoever for the endorsement of sexual relations between two people of the same sex under any circumstances. Consequently, there is no debate on this question in the Church (p.79).

Much has changed in America in the ten years since the book, Toward a Eucharistic Vision of Church, Family, Marriage and Sex, was published (2004). For instance, in an Illinois Senate Debate that year, Barak Obama stated, “I don’t think marriage is a civil right.” He went on to state that gay people have rights …but marriage was not among them.[1]
One need not be a political news junkie to understand that Obama’s views have changed. When running for President in 2008, Candidate Obama stated: “I believe that marriage is the union between a man and a woman.”[2] On May 9, 2012, Obama told an interviewer that he supported same-sex marriage.[3] Then, in 2015, one reads: “Calling state bans on same-sex marriage ‘incompatible with the Constitution,’ the Obama administration Friday filed a brief at the U.S. Supreme Court in support of couples who are making challenges in Kentucky, Michigan, Ohio and Tennessee.”[4]
Granted, Toward a Eucharistic Vision of Church, Family, Marriage and Sex is not about politics or the evolving belief of the President of the United States. But with such attention directed from the nation’s “bully pulpit,” is it any wonder that many Americans – even those within the Orthodox Church – are questioning the Church’s teaching on human sexuality?
Traditional media outlets – radio, television, movies – and, especially, social media, not to mention politically-correct public school systems, have indoctrinated the next generation of Americans with the notion that love knows no boundaries, and neither should laws regulating marriage. The speed at which we have reached this erroneous notion is dizzying. These days, to question this mandated mantra is viewed as backward, hate speech, bullying. It is for this reason that this book, especially the chapter on “same-sex unions” is a must read by those who seek to understand why the Church believes as She does.
Detailing commonly heard arguments of “orientation” and even citing those who make a good case for the same, LeMasters lays out the timeless position of the Church that “a homosexual relationship is [incapable] of bringing human beings to participation in the Trinitarian love of God in ways that are truly parallel to marriage between a man and a woman” (p.81). The foundation of God-pleasing union detailed throughout the book is our union with God in the Eucharist. With this in mind, LeMasters asks, “Is a homosexual relationship of the sort that may be a foretaste of the Wedding Feast of the Lamb?” (p.81) He is here referring to the eschatological imagery which permeates the Church’s scriptural witness:


From Genesis through Revelation, there is a continuity of God’s purposes for the man-woman relationship that is a unique means of our participation in the life of the Trinity. When man and woman die to self in the conventional love of marriage, they live eucharistically and participate in the very life of God, even as they prepare for the Kingdom. The fulfillment of God’s intentions for our nature as man and woman is possible only in Christian marriage. Hence, relationships which do not fulfill our nature as man and woman before God may not be instruments of grace or a means of participating in God’s reign. For this to happen, grace would have to become the foe of creation; in a dualistic fashion, nature and grace would then be enemies, rather than dynamic categories which together shed light on our standing before God as creatures who have strayed from the Lord’s purposes for us and who need a spiritual healing which is beyond our own ability to effect. Manachaean dualism once more would rear its ugly head” (p.85).[5]

Gnosticism believes that the spiritual cannot mix with matter; it does not matter what you do in the sensible realm as long as you understand the spiritual realm. Gnosticism – with its emphasis on knowledge as the key to power, science and religion – is dualism. It leaves men free to practice immorality.


Those who argue that the biological distinctions between the sexes amount to no more than spiritually irrelevant plumbing have fallen prey to the Gnostic dangers of radically distinguishing the person from the body. A faith which places so much weight on the Body of Christ – in connection to the incarnation, the resurrection, the Church, and the Eucharist – must never dismiss the importance of the bodily differences of man and woman, as they have been revealed to have tremendous importance in the economy of salvation from the biblical period to the present. It is unthinkable for the Church to bless unions which are so clearly perversions of God’s intentions for man and woman (p.85).


The substantial increase in Americans’ views that gay and lesbian relations are morally acceptable coincide with a record-high level of support for same-sex marriage and views that being gay or lesbian is something a person is born with, rather than due to one’s upbringing or environment.
The public is now more accepting of sexual relations outside of marriage in general than at any point in the history of tracking these measures, including a 16-percentage-point increase in those saying that having a baby outside of marriage is morally acceptable, and a 15-point increase in the acceptability of sex between an unmarried man and woman. Clear majorities of Americans now say both are acceptable.[6]

If you couple this with the recent Pew Research Center findings that 71% of Americans identified as Christian in 2014 (down from 78% in 2007), one must assume that even those within the pews have redefined their moral beliefs based on a mandated politically-correct agenda rather than the faith “once and for all delivered to the saints (Jude 1:3).”
Referring back to the chapter’s last quoted paragraph, above, no other conclusion can be reached than that many have indeed fallen into a Gnostic division of the body from the soul on the path to salvation. In other words, physical morality plays no part in the salvation of the soul. Such a belief is contrary to the witness of scripture, the fathers, and the saints of the Church. This deviation denies the witness of the Incarnation and distorts – nay destroys – a proper understanding of the Body of Christ as a communion of believers united in the Eucharist. Thus, as with any heresy, grace is denied.


God’s grace enables us for us the eschatological fulfillment and restoration of our nature, for the sharing of God’s reign through our participation in the life of the body of Christ. A homosexual relationship is not a fitting vehicle for coming to share more fully in God’s holiness. Regardless of arguments about whether homosexual activity is in any sense natural in our fallen world, Christians know the true nature of our sexuality if from what God has revealed about our creation and salvation as man and woman. Since grace restores and fulfills, but does not destroy our sexual nature as man and woman, to participate in homosexual relationships is to place oneself on a trajectory away from God’s gracious purposes for our sexuality. Hence, one who is not called to the vocation of heterosexual marriage should remain single and chaste, and take up the unique forms of ministry available to the celibate (p.87).

[1] Available: http://www.mediaite.com/online/obama-in-2004-homosexuality-not-a-choice-but-i-dont-think-marriage-is-a-civil-right/ (accessed May 27, 2015)
[2] Available: http://www.mediaite.com/online/obama-in-2004-homosexuality-not-a-choice-but-i-dont-think-marriage-is-a-civil-right/ (accessed May 27, 2015)
[3] Stein, Sam (May 9, 2012). “Obama Backs Gay Marriage”. Huffington Post.
[4] [March 6, 2015] http://www.cnn.com/2015/03/06/politics/obama-nationwide-same-sex-marriage/ (accessed May 27, 2015)
[5] Manichaeism: Manes (215-275) was a Persian and a Gnostic. He contrasted light and darkness, and maintained that Satan had hidden in man the particles of light, and that Jesus, Buddha, the Prophets, and Manes had been sent by God to help in the task of freeing men from the material and sensible world into the Light of Being. Manichaeism had a hierarchy, which distinguished the sensible, intellectual, and divine light. Manes was a proponent of knowledge of divine things, rather than faith. (Taken from an unpublished manuscript by the Rev. Dr. Charles Caldwell, 2010.)
[6] Available: http://www.gallup.com/poll/183413/americans-continue-shift-left-key-moral-issues.aspx?utm_source=Social%20Issues&utm_medium=newsfeed&utm_campaign=tiles (accessed May 27, 2015)
http://www.patheos.com/blogs/orthodixie/2015/06/review-an-orthodox-response-to-same-sex-unions.html
Posted by Father Philip LeMasters at 1:17 PM No comments: