Celebrating Christmas in a World that Still Needs the Prince of Peace: Homily for the Protomartyr Stephen the Archdeacon and the Sunday After the Nativity of Christ 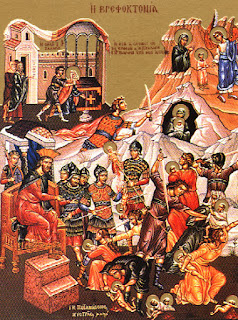 Posted by Father Philip LeMasters at 9:27 AM No comments:

A Gloriously Strange and Mysterious Feast: Homily for Christmas in the Orthodox Church 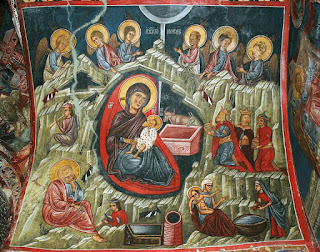 Today we celebrate a feast that is gloriously strange and mysterious. For the Eternal Word of God, Who spoke the world into existence, becomes part of that very world as a helpless baby born in a cave used as a barn. As angels sing in His honor, the humble shepherds and the wise men from a foreign land worship Him.  A young virgin becomes a mother, not simply of a son, but of the Son of God.   She gives birth to a child both fully human and fully divine.
Jesus Christ, an unusual and unexpected Messiah, is born this day to save and bless us.  He is the Second Adam in Whom all the corruption of the first Adam is healed.  He brings us into the life of God by entering into our life in this world of sin and death.  He is born to raise us to the holy, eternal life for which He created us in the first place in His image and likeness.
The Savior comes to us humbly and peaceably.  He takes the lowest, most vulnerable place for Himself:  born to a Jewish family that lived under the oppression of the Roman Empire and the cruelty of King Herod.  Soon Joseph would take the Virgin Mary and the young Jesus to Egypt by night, fleeing literally for their lives. He was born like the children today whose families flee from war and persecution in troubled nations in the Middle East, Africa, and elsewhere.
He is King of Kings and Lord of Lords, but in way totally different from the high and mighty of this world.   He is the Prince of Peace Who comes to restore and heal His creation without brutal domination or physical violence. He makes all who believe in Him the sons and daughters of the Most High—not as slaves, but as children and heirs who share in His divine glory by grace. That is something no earthly ruler or mere religious teacher could ever accomplish.  Only the Incarnate Son of God can make us participants in the divine nature, for He Himself is truly divine and human.
In the good news of Christ’s birth, we encounter the deep mystery of the Immortal One Who put on mortality.  Out of humble, selfless love beyond our understanding, the Son of God lowered Himself to become a human being, “born of a woman, born under the Law,” as St. Paul wrote to the Galatians.  He is not an idea to be defined or debated about, but a Person Who shares His life with us.   So that we could enter into Him, He entered into us, sanctifying every aspect of our humanity from the womb to the tomb that could not contain Him.  Nothing human is foreign to Him, and nothing is rightly human that is not healed, transformed, and fulfilled by His holiness and grace.
Let us take the foreign wise men as models of how to respond to the great mystery that God has become a human being: namely, let us worship Him by uniting ourselves to Christ as fully as possible in faith and obedience.  That is how we will share personally in the wondrous transformation of the human being that the Incarnate Son of God has made possible.  Because Christ is born, the peace and joy of God’s kingdom may be ours even as we live and breathe in the world as we know it.  Because Christ is born, we may encounter Him in every human being, especially the poor, the needy, the stranger, and the outcast.  Because Christ is born, we may participate already in the eternal life for which we were created in God’s image and likeness.
The only limits on the blessing of Christmas are those that we place on ourselves.  For the One Who appears as a baby in a manger never forces us or anyone else.  He is the Mystery of Love made flesh for our salvation.  We welcome Him into our lives by choosing to live in ways that reflect the deep truth of the Incarnation.  We welcome Him into our lives by becoming living icons of the good news of this season.   We welcome Him into our lives by becoming participants in the deified humanity that the God-Man Jesus Christ has brought to the world.
As we celebrate this great feast, let us live as those who have become the sons and daughters of the Father through Him, for now nothing but our own refusal can separate us from His love.  Yes, my brothers and sisters, that is the deep spiritual mystery of the Incarnation.  By uniting humanity and divinity in His own Person, Jesus Christ has fulfilled our original calling to become like God.  The door to the Kingdom is now wide open and leads through our own souls, through our own existence as human beings.  In Him, we find the holy joy for which we were made.  There could be no greater cause for rejoicing this day or any other.

Posted by Father Philip LeMasters at 12:48 PM No comments:

Perfect Members of a Scandalous Family: Homily for the Sunday Before the Nativity of Christ in the Orthodox Church


The Lord’s genealogy contains a lot of people who are a lot like us, for that is who He came to save.  In the coming days before Christmas, let us prepare to embrace more fully the promises made to Abraham and fulfilled in our Lord, God, and Savior Jesus Christ.  He comes to make us—with all of our outrageous problems and imperfections-- members of own His family.  Our inclusion is part of the perfection of that ancient heritage of faith and expectation.  So let us kneel before Him in humility this Christmas with a profound sense of gratitude and joy. And let us never, ever give up in believing that His mercy extends to people like you, me, and the members of our less than perfect families.  That is precisely whom He came to save.
Posted by Father Philip LeMasters at 2:53 PM No comments:

Preparing to Appear with Christ in Glory: Homily for the Sunday of the Holy Forefathers in the Orthodox Church 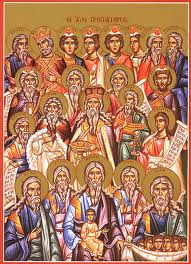 
Christmas will be here soon, and how we respond to the Lord as His birth will make clear the state of our souls.      Will we be ready to welcome Christ into our lives at His birth?  Will we be ready to accept the invitation to the feast?  I certainly hope so, for the good news of Christmas is that in our Lord the fulfillment of all God’s promises is extended to people like us, those poor, blind, and lame with sin, who suffer from the pain, weakness, and corruption of life in the world as we know it, and who are nowhere near perfect.  The good news is that, in the Babe of Bethlehem, even unlikely people like you and me are invited to take our place with the Holy Forefathers and Foremothers of Christ in the heavenly banquet and to shine with the light of heaven, to appear with Him in glory.  That is why our Savior was born.
Posted by Father Philip LeMasters at 12:29 PM No comments:

St. Nicholas the Wonderworker: An Extraordinary Model of Ordinary Holiness 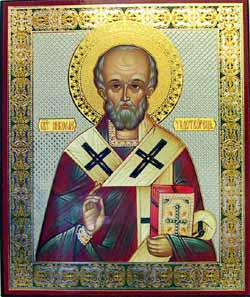 
We simply face the same temptations and difficulties that fallen humanity has always faced in one form or another.  It is through such difficult circumstances that faithful people come to shine with the light of the heavenly Kingdom.  That was true of St. Nicholas, and it will also be true of us, if we follow his example of daily obedience in the ordinary details of our lives.  If we pray from the depths of our souls, love and serve our neighbors, forgive our enemies, hold fast to the truth, call on the Lord’s mercy when we fall short, and then get back on track, we will grow in holiness to the point that we will be ready to welcome our Savior at His birth this year with joyful and hopeful hearts.  That is the simple way of St. Nicholas.  Regardless of the world’s problems or our own personal struggles, this must also be our way in the remaining weeks of the Nativity Fast.
Posted by Father Philip LeMasters at 3:02 PM No comments: