Freely Receive, Freely Give: Homily for the Unmercenaries Cosmas and Damian, Martyrs in Rome, & the Fifth Sunday of Matthew in the Orthodox Church 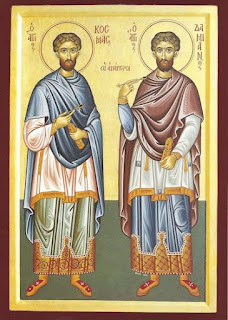 Posted by Father Philip LeMasters at 5:15 PM No comments:

Homily for the Nativity of the Prophet, Forerunner, and Baptist John in the Orthodox Church 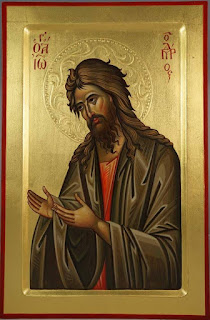 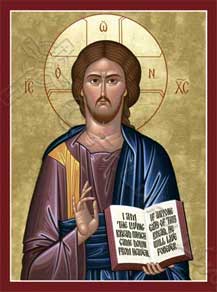 Posted by Father Philip LeMasters at 5:21 PM No comments:

Everyday Holiness: Homily for the Sunday of All Saints in the Orthodox Church 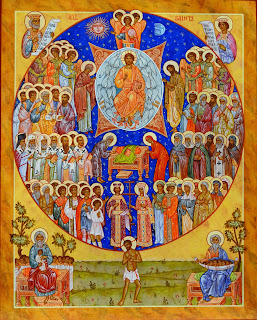 If you are like me, sometimes when you read the lives of the saints you shake your head and think, “I could never do anything like that.” Many endured horrible tortures to the point of death because they refused to deny Christ.  Others denied themselves food, clothing, and shelter in ways that seem beyond the strength of human beings.  Some accepted insult and abuse while forgiving their tormentors and turning the other cheek in a fashion that seems not of this world.  As today’s epistle reading reminds us, the Old Testament saints endured such trials purely in anticipation of the coming of the Savior.  Most of us, who have received the fullness of the promise in Christ, cannot fathom how we could be nearly as faithful as was this cloud of witnesses who point us by their examples and prayers to commend our lives to Christ.

On this Sunday of All Saints, we commemorate all those who have united themselves to the Lord to the point that they have become radiant with His holiness by the power of the Holy Spirit, including those whose are not formally canonized as saints by the Church.  The canonized saints are like the members of the hall of fame who stand as shining examples of obedience to the Lord. We celebrate them because their lives are such vivid icons of what it means for a human being to become a partaker of the divine nature by grace.  We do not know the names of all the saints, of course.  Not all who are illumined with the divine glory are known publically as such; of course, the point of holiness is never simply to draw attention to oneself.  It is, instead, to be faithful in offering our lives to Christ. Only He knows the names and number of those Who have done that, for He alone knows our hearts.

If we want to join their number, then we must attend carefully to Christ’s teachings today in the gospel reading.  “Everyone who acknowledges Me before men, I also will acknowledge before my Father Who is in heaven; but whoever denies Me before men, I also will deny before My Father Who is in heaven.”  No doubt, these words concern the importance of remaining faithful to the Lord even in the face of fierce persecution.  Martyrs and confessors continue to refuse to deny Him, regardless of the physical abuse they suffer in many countries around the world.  But we would let ourselves off the hook by thinking that this teaching refers only to those who lives are literally at risk for being faithful Christians.  We must also ask whether we acknowledge Him before our neighbors every day of our lives in what we say and do. It is only our pride that makes us think that true faithfulness must be dramatic and spectacular.  Most of us struggle to be faithful even in our routine trials and temptations.  We will fail to unite ourselves to Christ in holiness if we fail to see that the most common challenges that we face are our opportunities to acknowledge that we belong to Him, and not simply to ourselves.

The Savior said, “He who loves father or mother more than Me is not worthy of Me; and he who loves son or daughter more than Me is not worthy of Me; and he who does not take his cross and follow Me is not worthy of Me.”  There is nothing wrong, of course with loving our parents or our children, but if we are to become radiant with the holiness of God, we must keep even our strongest loves in proper order.  We must remember that our parents, children, and spouses are gifts of God to us. His love is obviously the ground of all love worthy of the name.  Our calling is not to worship people or make them ends in themselves, but to relate to them in a way that fulfills God’s gracious purposes for them and us.  If we make false gods out of others, we will make them miserable and probably drive them away. And since God created us in His image and likeness, we will learn the hard way that we will never find fulfillment in anyone but Him.

“People pleasing” is quite dangerous because it is ultimately a self-centered form of idolatry in which we crave the approval of others to the point that we will sacrifice anything for it.  Instead of offering even our most prized and intimate relationships to the Lord for His healing and blessing, we end up offering ourselves to others, willing to compromise our faithfulness for the sake of giving whomever we want to impress what we think they want.  That is not taking up our crosses, but sacrificing our obedience to the Savior in order to serve lesser gods.  And since what drives this attitude is our self-centered desire for the approval of others, it is ultimately a way of worshiping ourselves.

Too often we think that holiness occurs only within the context of the four walls of the Church.  If we are to take up our crosses and follow Christ, we must also learn to see the infinite opportunities of dying to self out of love for Him and our neighbors in our daily lives.  That means we must take a painfully honest look at ourselves.  For example, we may enjoy filling out minds with entertainment—such as news, social media, video games, film, etc.--that only inflames passions of worry, fear, hate, envy, and lust.  If so, we need to turn away from it as we focus on the words of the Jesus Prayer or at least something else that does not inflame our passions.  If we cannot learn to make such small sacrifices, we will never have the strength to make larger ones.

Regardless of our age, we likely are close to people whose values and way of life are apparently not consistent with obedience to Christ.  Even as we must not condemn them personally, we must resist the subtle temptation to compromise our faithfulness to the Lord in what we say and do in order to gain their approval.   It is one thing to show everyone Christ’s love as best we can, but another to fail to acknowledge Him by engaging in conduct and conversation that contradict our primarily loyalty to Him.  That would be a form of putting other people, and ultimately ourselves, before God, which is a path only to greater weakness for them and us.  We must all discern mindfully and prayerfully whether we are acknowledging Christ in situations where it is much easier to act and speak as though He were not our Lord.  We must all be willing to take up the cross of obedience to Him even if it means that we will be met with disapproval.

“Many that are first will be last, and the last first.”  The Savior’s statement applies to all who have put Him first in their lives, for doing so requires sacrificing much that the world worships.  It is obviously the case for martyrs and confessors to this very day, but also applies to everyone who sacrifices, even in small ways, in order to seek first the Kingdom of God.  When we direct our time, energy, and attention to serve Christ, His Church, and our neighbors in whom He is present, we take a lower place in the estimation of the world.  When we refuse to sacrifice ourselves on the altars of conventional accounts of success and happiness, we embrace the humility of Christ.  Even when we do so in seemingly ordinary ways, we take step in running “with perseverance the race that is set before us, looking to Jesus the pioneer and perfection of our faith.”  That is how, we too, may join that great cloud of witnesses who have become radiant with the holiness of our Lord. Nothing dramatic or spectacular is required, but only true faithfulness.

Posted by Father Philip LeMasters at 11:58 AM No comments: