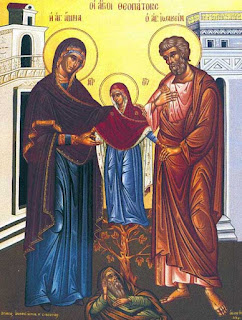 I heard a radio report today that described single men becoming fathers through the services of surrogate mothers.  The report discussed the practice as though it were a perfectly normal and healthy way for a man to have his own biological children without the trouble of getting married.  On yet another issue involving the relationship between men and women, our mainstream culture has apparently lost the ability even to recognize a scandal.
In contrast, Orthodox Christians know that God creates us male and female in His image with the calling to grow ever more in His likeness, that is, to become holy.  Husband and wife are uniquely blessed to bring forth new life out of their love for one another as manifested in the joyful “one flesh” union of intercourse.  The family then becomes an image of the Holy Trinity comprised of distinctive persons sharing a common life and united in love.
Intentionally conceiving children outside of the embodied personal union of husband and wife raises red flags that that anyone should be able to notice.  For example, the practice of surrogacy underwrites a utilitarian view of the most intimate dimensions of a woman’s body, which is sometimes rented for money or loaned out for friendship.  The similarities to prostitution or promiscuity are obvious. Surrogacy also encourages women to separate conception, pregnancy, and childbirth from childrearing.  (Should anyone be encouraged to conceive a child that he or she doesn’t intend to bring up?)  Anything that fosters a weakening of the bond between mother and child can’t be good.   It’s quite dangerous to take steps that devalue women’s bodies and their unique ability to nurture babies. That’s still how we all come into the world.
If the client who intends to raise the child changes his mind or dies during the pregnancy, the surrogate mother would then be pregnant with a baby she had no intention of raising.  Abortion may well be the tragic result.  Many jurisdictions do not allow for the enforcement of contracts for surrogacy, which is an indication that sane people still recognize that we are dealing with matters here far more profound than whatever deals people have made.
There are also problems with how children are conceived in these circumstances.  When a single man has his sperm united with a woman’s egg, whether through artificial insemination or in vitro fertilization, the holy mystery of conceiving children through the personal union of two who become one flesh is obscured to the point of being lost.  What God intends man and woman to do through their steadfast love for one another, which is a sign of the overflowing charity of the Holy Trinity, is reduced to a cold, impersonal lab procedure.  There’s no truly personal union between man and woman in such cases.
If a married couple conceive through IVF or otherwise and then have the embryo transplanted to a surrogate, they bring a third-party into the most intimate dimension of their life together.  The problem is that the one flesh union of marriage is between one man and one woman.  Our children are the fruit of our bodies, of the intimate “one flesh” union of two people.  To bring someone else’s body into the picture is a form of adultery.
Orthodox Christians, and others with good moral sense, will see that adoption is a far better solution for the childless than is the scandal of surrogacy.  Children without parents are already living human beings in need.  To provide them homes and families is entirely virtuous. Instead of perpetuating practices that risk disaster for all concerned, our Church and our society should do all that they can to promote adoption.