How Strangers and Foreigners Become God's Holy Temple: Homily for the Sunday of the Canaanite Woman in the Orthodox Church 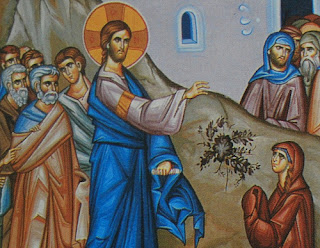 Posted by Father Philip LeMasters at 1:26 PM No comments:

Two Paths to the Kingdom: Homily on Zacchaeus and the Apostle Timothy in the Orthodox Church 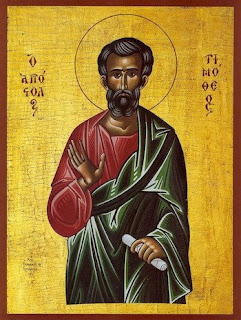 Posted by Father Philip LeMasters at 1:27 PM No comments: 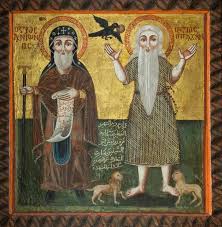 
Posted by Father Philip LeMasters at 2:14 PM No comments:

The Creation Fulfilled and Restored: Homily for the Sunday After Theophany (Epiphany) in the Orthodox Church


We will not find salvation in isolation, but as persons united in holy love who share a common life in Christ.  As those created in His image and likeness, that is our natural state.  It is revealed at Christ’s baptism that He is the Son of the Father.  That is a relationship of holy love beyond our full understanding.  To be in loving relationship with others is a key dimension of what it means to be a human being in the divine image and likeness.  When we bless our homes, we find strength to make our marriages and families icons of the fulfillment of God’s gracious purposes. That is only a start, however, as we must intentionally turn away from darkness in all its forms in order to become radiant with the light of Christ.  In other words, we must repent. That is ultimately how to celebrate this great feast, by offering every dimension of our lives to the Lord such that we become living epiphanies of His salvation in the world as we know it.  The point is not to escape the world, but to become icons of its fulfillment.
Posted by Father Philip LeMasters at 2:33 PM No comments:

Purifying the Heart: Homily for the Feast of the Circumcision of Christ in the Orthodox Church 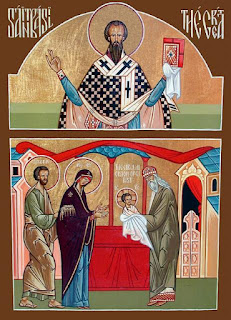 The great mystery of the Son of God becoming a human being shines brightly today as we celebrate the feast of the Circumcision of Jesus Christ.  Like any other Jewish male, He endured the procedure that was the mark of becoming an heir to the promises to Abraham.  He is not, of course, simply another child of Hebrew heritage, but also the eternal Word Who spoke the universe into existence.  Nonetheless, He humbles Himself today to be circumcised in the flesh as were His forefathers.
St. Paul, a former Pharisee and expert in the Jewish law, strongly opposed requiring Gentiles to be circumcised in order to become Christians.  He knew that Christ had fulfilled the promises of the Old Testament such that they were extended to all people who have faith in the Messiah.  He writes to the Colossians that “you have come to fullness of life in Him, Who is the head of all rule and authority. In Him also you were circumcised with a circumcision made without hands, by putting off the body of flesh in the circumcision of Christ…”  Elsewhere St. Paul teaches that true circumcision is “of the heart, in the spirit, and not of the letter” of the law. (Rom. 2: 29) He knew that Christ’s circumcision is a sign that He fulfilled the requirements of the law and enabled all with faith in Him to find a righteousness that exceeds that of the scribes and Pharisees because it extends to the very depths of our existence, to our hearts.
Consequently, the only way worthily to celebrate His circumcision is for us to perfect the circumcision of our hearts.  That means purifying them, cutting off their corruption by uniting ourselves to the God-Man from the depths of our souls.  And there is no upward limit to this calling.  Remember that the Lord interpreted the Old Testament law to forbid not only murder, but also anger and insults--and not only adultery, but also lust.  He did not simply call His disciples to limit vengeance to an eye for an eye, but to forgive and bless even their enemies.  (Matt. 5:20 ff.) His concern is not simply with outward appearances, conventional morality, or going through the motions.  By becoming fully human even as He remained fully divine, He enables us to become perfect in love for God and neighbor even as He is perfect.  Such a life cannot be captured by even the best words and ideas.
If we reduce our high calling to legalism or a simple list of deeds to perform, we will have missed the point.  For being united with Christ in holiness is not a matter of simply doing this or that by our own will power.  As St. Paul reminded the Colossians, “you were buried with Him in baptism, in which you were also raised with Him through faith in the working of God, Who raised Him from the dead.”  We obviously cannot conquer sin and death by even our best actions or thoughts.  As St. Paul taught, “By grace you have been saved through faith, and that not of yourselves; it is the gift of God.” (Eph. 2.:8.)
There is no avoiding the truth that the more fully we unite ourselves to our Savior in daily prayer from our hearts, the more we will participate personally in His blessed life.   We shape ourselves by what we think about, what we fill our hearts with, and what we love and hope for.  Let us celebrate the Circumcision of our Lord by orienting ourselves from the depths of our souls to the One Who has fulfilled and extended the ancient promises to Abraham even to us.  That means turning the thoughts of our hearts back to Him in the Jesus Prayer as often as we possibly can.  It means opening our hearts to Him in focused prayer each day.  It means keeping a close watch on our thoughts and refusing to accept and fuel those that are corrupt and inflame our self-centered desires and fears.


It means taking our place in the unfolding of God’s salvation by cutting off from our hearts and minds all that would separate us from embracing as fully as possible the great mystery of the One Who was circumcised in the flesh on the eighth day.  That is how we will find the strength to serve Him faithfully not only in this New Year, but all the years of our lives.  That is how our faith will become more than a collection of quaint customs and rituals, but truly our participation in eternal life as whole human beings. That is surely His will for us all as we celebrate this feast of our salvation in the God-Man Who became one of us in order that we might become like Him in holiness.  That is the good news that we celebrate this day.
Posted by Father Philip LeMasters at 2:56 PM No comments: