Homily for the Sunday of the Paralytic in the Orthodox Church 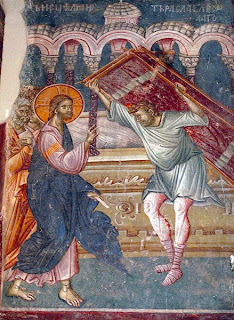 
Posted by Father Philip LeMasters at 5:25 AM No comments:

Homily for the Sunday of the Myrrh-Bearing Women, Joseph of Arimathea, and Nicodemus in the Orthodox Church 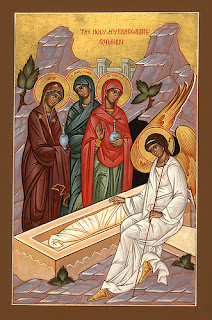 Posted by Father Philip LeMasters at 3:37 PM No comments:

Homily for Thomas Sunday in the Orthodox Church 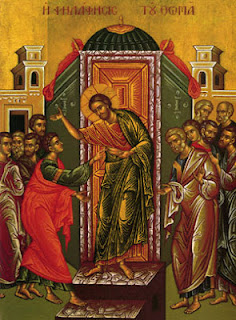 IOCC Meeting with the Patriarch of Antioch

IOCC's Executive Director and Board Chair with Patriarch John X (Photo: George Antoun/IOCC)International Orthodox Christian Charities (IOCC) reports:
It was a holy and historic day in Beirut. More than 1,000 hierarchs, clergy and lay people packed the incense-filled nave of Saint Nicholas Orthodox Cathedral on February 17, 2013, including both the President and Prime Minister of Lebanon, as well as government officials from the U.S., Russia, and other countries around the world.
Joining them were International Orthodox Christian Charities (IOCC) Board Chairman, Michael “Mickey” Homsey, and IOCC Executive Director, Constantine Triantafilou, who had both traveled from the United States to attend at the invitation of the Greek Orthodox Patriarchate of Antioch and All the East. All were there to witness the same milestone, the first Divine Liturgy served by His Beatitude, John X, the newly elected Patriarch of the Greek Orthodox Patriarchate of Antioch and All the East.
His predecessor, Patriarch Ignatius of Blessed Memory, spent more than three decades serving as the spiritual father of the Orthodox faithful in Syria. Patriarch Ignatius’ leadership provided a wellspring of inspiration and comfort to Orthodox Christians throughout the Middle East, especially during troubled times. Without His Beatitude’s grateful assistance, IOCC's humanitarian efforts in the region would not have been fully realized.
Both Homsey and Triantafilou had met with Patriarch Ignatius during a visit to Syria last year shortly before his repose, during which they were humbled to receive His Beatitude’s blessing for IOCC’s ongoing humanitarian work in Syria, and his praise for the organization serving as a beacon of hope for so many struggling families.
Now before them stood a new spiritual father, chosen by the grace of God and His Church peers to serve as a leader and a visionary to His Antiochian Orthodox flock. Before this momentous weekend, Homsey and Triantafilou had only known of His Beatitude’s years of illustrious service in Europe ministering to people of diverse languages and cultures. They had been less certain of Patriarch John X’s familiarity with the humanitarian work of IOCC in Syria, which began in 2002 on small projects to rehabilitate schools, hospitals and orphanages.
Later in 2007, IOCC began providing tuition assistance, school supplies, tutoring and personal care kits to thousands of Iraqi refugee schoolchildren and disadvantaged Syrian schoolchildren as well as their families. Assistance expanded to vocational and business training for Iraqi refugee men and women resettled in Syria when conflict forced them to flee their own country. Most recently, IOCC has responded to the humanitarian crisis brought on by the conflict in Syria with assistance reaching more than 425,000 Syrian children, women and men displaced in their own country or living as refugees in Jordan, Lebanon, Armenia and Iraq.
Homsey and Triantafilou were honored with an invitation to meet Patriarch John X for a private audience at the Patriarchal residence at Balamand University on the Saturday before Divine Liturgy. Homsey recalled the encounter vividly. “What struck me most about our meeting was how much His Beatitude knew about the work of IOCC and our long-standing relationship with the Greek Orthodox Patriarchate of Antioch," said Homsey. “We spoke at length of the tragic humanitarian situation in Syria and His sincere desire to continue supporting IOCC’s mission to assist, without discrimination, all who are in need.”
They discussed the situation in Syria, which grows grimmer and more desperate each day. More than six million Syrian people have been affected by the bitter two-year conflict, and nearly four million people are now displaced in their own country, displaced from homes, jobs, and schools destroyed by the violence. IOCC and its church partner inside Syria, the Greek Orthodox Patriarchate of Antioch and All the East are among the very few lifelines that the Syrian people have to the outside world.
“In spite of all this,” said Homsey, “I was moved beyond words when His Beatitude stated that no matter the difficulties, the Christians will not leave the Middle East. His resolve serves as an inspiration and comfort to all Orthodox Christians who look to Antioch, and the sacred sites of Christianity throughout Syria and the Holy Land as the fountain from which our faith flows.”
http://www.antiochian.org/iocc-dignitaries-meet-patriarch-john-x
Posted by Father Philip LeMasters at 11:20 AM No comments: