Regaining our Spiritual Vision During Advent: Orthodox Christian Homily on the Healing of the Blind Beggar (14th Sunday of Luke) 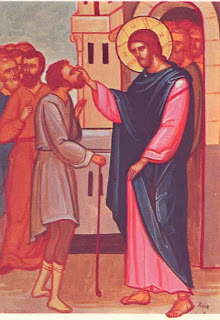 
In other words, be like that blind beggar who knew that his only hope was in Jesus Christ.  Refuse to give up in prayer for the Lord’s mercy, as well as in whatever types of fasting and almsgiving you are able to do at this point your life.  Use your weakness in all of these endeavors as food for your humility, and get on with the daily life of faith and faithfulness as the Lord strengthens and focuses your spiritual sight as He sees fit.  Surely, there is no better way to prepare to behold the glory of our Savior when He is born at Christmas.
Posted by Father Philip LeMasters at 6:28 PM No comments:

Contributed Photo McMurry University professor Philip LeMasters’ book, The Forgotten Faith: Ancient Insights for Contemporary Believers from Eastern Christianity,” was published recently by Cascade Books.
A glance at the table of contents tips readers off that what they are about to read isn’t a stuffy book on the history of Eastern Orthodoxy.
McMurry University religion professor Philip LeMasters, who also is a local Orthodox priest, set out to write a popular book about his religion that would be appealing to those with little or no background in the faith.
With chapter headings such as, “Salvation, Sex, and Food,” and “Football, Liturgical Worship, and Real Life,” he no doubt accomplished his goal.
LeMasters’ book is titled, “The Forgotten Faith: Ancient Insights for Contemporary Believers from Eastern Christianity.” It recently was published by Cascade Books, an imprint of Wipf and Stock Publishers.
During the academic year, LeMasters takes art and religion majors from McMurry, Hardin-Simmons and Abilene Christian universities on tours of his church, St. Luke’s Orthodox, explaining the faith as he goes.
He points out the icons, incense and other features that may be foreign to students at United Methodist, Baptist, and Church of Christ universities.
“The book grows from those talks,” LeMasters said.
But the book isn’t just a transcription of those talks. It contains a section on how LeMasters came into the Orthodox faith after growing up Baptist and attending an Episcopal church. And, LeMasters’ academic background comes through in tracing the faith’s roots and practices. A foreword by Everett Ferguson, a retired professor of church history at ACU, says it best.
“He writes with the fervor of a convert and the balance of a scholar,” Ferguson wrote.
LeMasters said the point of his talks to students and the book is not to make converts but to explain the ancient faith and its practices that may seem odd to outsiders.
LeMasters wears several hats at McMurry. He is a professor or religion and dean of the School of Social Sciences and Religion. He also directs the university’s Honors Program.
Even with all those opportunities, LeMasters said he will resist the temptation to require students to buy his book as a textbook supplement. He didn’t rule out colleagues doing that, however.
“If some of my friends at ACU and Hardin-Simmons want to use it,” he joked, “that would be great.”
http://www.reporternews.com/news/2013/nov/29/book-makes-eastern-othodoxy-more-understandable
© 2013 Abilene Reporter-News. All rights reserved. This material may not be published, broadcast, rewritten or redistributed.

Posted by Father Philip LeMasters at 5:37 AM No comments:

Holiness Instead of Legalism: Homily on the Rich Young Ruler in the Orthodox Church

Posted by Father Philip LeMasters at 11:57 AM No comments:

Start reading The Forgotten Faith on your Kindle in under a minute. Don't have a Kindle? Get your Kindle here.

Publication Date: November 7, 2013
There's more to Eastern Christianity than ethnic food bazaars, enclaves of immigrants, and clergy with beards. The mystical theology, spiritual disciplines, and rich liturgical worship of the Orthodox Church provide sustenance for anyone seeking resources for growth in the Christian life. Ancient teachings and practices persist in Eastern Christianity that hold together much of what Catholics and Protestants have separated. Believers of all stripes increasingly resonate with Orthodoxy's healthy synthesis of prayer, doctrine, liturgy, asceticism, and call to holiness in all areas of life. This ancient faith speaks with refreshing clarity to contemporary Christians who want to learn from a living tradition that is too little known in Western culture. This volume presents profound insights that will enrich, challenge, and inspire readers of all backgrounds. It invites everyone to encounter a spiritual tradition that is ancient, contemporary, and fascinatingly different.

"If you ever wondered what Christianity looked like in its early centuries and still looks like in the Orthodox Church of the twenty-first century, it would be hard to find a better starting point than Philip LeMasters' The Forgotten Faith."
--Jim Forest, author of Praying with Icons

"Drawing on his conversion to Orthodoxy, LeMasters introduces the mysteries that make Orthodoxy what it is with a gentle clarity befitting the great church. For anyone wanting to learn about the Orthodox faith there is no better place to begin than with The Forgotten Faith."
--Stanley Hauerwas, Professor of Theological Studies, Duke University

"Gracefully and without apology, LeMasters combines autobiography with evangelism in his review of ancient Orthodox teachings and their contemporary belonging. To say that this is popular and not serious theology does injustice to a narrative that is both scholarly and accessible. Buy it, read it, and give it to someone curious about Orthodoxy as an alternative in American Christianity."
--Harmon L. Smith, Emeritus Professor of Moral Theology, Duke University

"LeMasters knows both his subject and his readers intimately; yet there is not a hint of condescension. Written from heart to heart, there is a wonderful combination of telling anecdote and insightful commentary. The outcome is a book worthy of both prayerful pondering and critical appreciation."
--William J. Abraham, Professor of Wesley Studies, Perkins School of Theology, Southern Methodist University

"This fine primer on the moral and spiritual life is no venture in ecumenical neutrality. Simply, clearly, personally, but never polemically, LeMasters lays out the basic doctrines and practices of the Orthodox East. Thus does he demonstrate why, especially here in the West, it should not become a forgotten [form] but a vital form of Christian faith."
--Ralph C. Wood, Professor of Theology and Literature, Baylor University

Philip LeMasters is Dean of the School of Social Sciences and Religion at McMurry University and the Corporate Secretary of the Board of Trustees of St. Vladimir's Orthodox Theological Seminary. A priest of the Antiochian Orthodox Christian Archdiocese of North America, he is the author of Toward a Eucharistic Vision of Church, Family, Marriage, and Sex (2004) and The Goodness of God's Creation: How to Live as an Orthodox Christian (2008).
Show more

http://www.amazon.com/Forgotten-Faith-Contemporary-Believers-Christianity-ebook/dp/B00GR782U0/ref=sr_1_1?s=books&ie=UTF8&qid=1385156475&sr=1-1&keywords=forgotten+faith+LeMasters
Posted by Father Philip LeMasters at 1:50 PM No comments:

Parable of the Rich Fool in Contrast to the Entrance of the Theotokos into the Temple: Homily for the First Sunday of Advent in the Orthodox Church (2013)


So it is time to come to our senses and follow the Mother of God into eternal joy.  We will do that in the coming weeks by rejecting the lies that we have let take root in our souls about what is most important in life.  Turning away from worldly obsessions and distractions, let us turn to Christ as we prepare to receive Him at Christmas.  The peace that He brought to the world is available to us, if we will only receive Him as His mother did in purity and obedience.  Now is the time to follow the Theotokos into the Temple as we get ready to become living temples of the Lord when the incarnate Son of God becomes one of us at His Nativity.  For He alone is our peace, our hope, and our joy.  It is time to get ready for Him and to turn away from everything in our lives that is not holy, pure, and blessed.
Posted by Father Philip LeMasters at 6:59 PM No comments:

Posted by Father Philip LeMasters at 6:57 PM No comments:

Orthodox Homily on the Parable of the Rich Man and Lazarus with Insights from C.S. Lewis 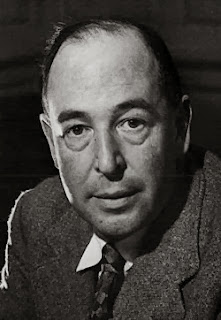 
Such love is not a feeling, an emotion, or a sentiment.  It is a commitment, a sacrifice, and an offering of ourselves to God in the service of the living icons of Christ whom we encounter every day, namely every human being with whom we come in contact.  So let us be Christians not merely in name, but also in how we live, even when it is inconvenient.  Then we will be shaped decisively by the same divine mercy that we ask for ourselves and we will participate already in the eternal joy that Jesus Christ has brought to the world.
Posted by Father Philip LeMasters at 7:52 PM No comments: