Memory Eternal!: His Beatitude Patriarch Ignatius IV of Antioch and All the East

Patriarch Ignatius IV of Antioch Has Reposed after Suffering Stroke 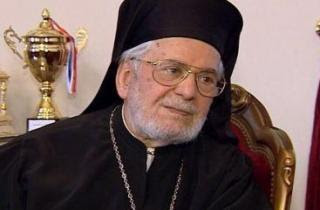 Patriarch Ignatius IV Hazim of Antioch and all the East passed away on Wednesday after suffering from a stroke.He was admitted to Saint Georges Hospital after suffering from a stroke on Tuesday.
Born in 1921 in Mhardeh in Syria’s Hama province, he pursued his studies at the American University of Beirut and soon entered the service of the local Orthodox diocese.
He was one of the founders of the Orthodox Youth Movement in 1942.
He was appointed as bishop in 1961 and was elected as the Metropolitan of the Latakia province in Syria in 1970.
He was elected as patriarch of the Antioch and all the East in 1979.
Source: Naharnet
Login
Follow the discussion

Login or signup now to comment.
There are no comments posted yet. Be the first one!

Patriarch Ignatius IV of Antioch Has Reposed after Suffering Stroke

://www.pravmir.com/patriarch-ignatius-of-antioch-has-reposed-after-suffering-stroke/
Posted by Father Philip LeMasters at 6:27 AM