There is No Shame in Repentance: Homily for the Commemoration of St. Mary of Egypt and the 5th Sunday of Great Lent in the Orthodox Church 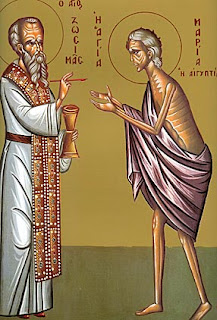 Hebrews 9:11-14; Mark 10:32-45
It has never been hard to find examples of people using religion to get what they want in this world.  It is usually easy to see when others do that, but much harder to recognize when we fall prey to the temptation of trying to use God to fulfill our self-centered desires.  The harsh truth is that doing so is simply a way of worshiping ourselves, no matter what we say we believe.
In today’s gospel lesson, James and John understood Christ’s prediction of His death and resurrection so poorly that they asked for the places of highest honor in His Kingdom, which they surely imagined would be an earthly political realm. The Lord told them that they did not know what they were asking, for to be exalted in His Kingdom would require sharing in the cup and baptism of His great Self-offering for the salvation of the world. It would require “becoming the servant of all.  For the Son of man also came not to be served but to serve, and to give His life as a ransom for many.”
The Savior taught His confused disciples that His way is completely different from the path of earthly rulers who seek to exalt themselves by lording it over others.  He suffered at the hands of precisely such authorities who could not tolerate any threat to their power.  By ascending the Cross, descending to Hades, and rising from the tomb, Christ revealed the pathetic weakness of those who use the fear of death to serve their own fleeting glory upon the earth.  To attempt to use His Kingdom to fulfill self-centered desires for power, pleasure, or any other worldly goal is to miss the point entirely of why our Great High Priest offered Himself as the Lamb of God Who takes away the sin of the world. By uniting ourselves to Him in holiness, we become participants by grace in the eternal life of the Holy Trinity, not people who are successful in making the world their god.
Today we commemorate St. Mary of Egypt, who found healing in Christ from notorious addiction to sexual pleasure, which is another form of the idolatry of making the world our god.  Through decades of intense asceticism in the desert, she found healing from domination by lust and became a glorious saint.  She did so not by pursuing the false glory of the world, but by becoming radiant with the glory of God through humble repentance.
Addiction to gratifying our self-centered desires, no matter what they are, distorts the beauty of our souls as those who bear God’s image and likeness.  We must remember, however, that Christ’s mercy extends to even the most corrupt sinner who comes to Him in humble repentance.  Zacchaeus turned from his love of money by returning more than what he had stolen and by giving generously to the poor.  In contrast to the self-righteous Pharisee in the parable, the tax collector humbly begged for God’s mercy and found it.  The prodigal son came to himself and was restored beyond his expectations.  The disciples ultimately abandoned their desire for worldly power and became martyrs, including St. Peter, who had denied the Savior three times.  St. Paul went from being a fierce persecutor of Christians to the apostle to the Gentiles.  St. Mary of Egypt, who began as a horribly depraved person, ended up as such a model of sanctity that we celebrate her memory each Lent without shame or embarrassment. We learn from these examples that there is always hope for the healing of our souls, regardless of the mess we have made of our lives.   Our faith is not in a simple moralism in which the good succeed and the bad fail, but in a Lord Who has conquered the enslaving power of sin and death.  He came to call not the righteous, but sinners to repentance.
The healing of human persons in such remarkable ways is not accomplished by the conventional politics or ethics of this world, regardless of whether religion is somehow invoked to support them.  Such transformation is, instead, a sign of Christ’s victory through His Passion.  His selfless service for our sake knew no bounds and stopped at nothing, not even Hades and the tomb, in order to deliver us from the despair to which we had enslaved ourselves.  He freely entered into the full consequences of our corruption in order to heal and triumph over them.  He did so not for His own sake, but for ours.  “For the Son of man also came not to be served but to serve, and to give His life as a ransom for many.”
As we begin the last week of Great Lent, let us be on guard against the temptation to use any aspect of our faith for self-glorification.  If our prayer, fasting, almsgiving, and other spiritual disciplines become means of merely accomplishing our goals or of making us think that we have achieved some level of righteousness, they will do us more spiritual harm than good.  They are, instead, simply ways of opening ourselves to the healing mercy of Christ so that we will become more like Him. The more that His life becomes ours, the more we will find strength to take up our crosses as we follow Him into a Kingdom not of this world. The more that we take our eyes off ourselves and serve our neighbors in humility, the more we will find the healing of our souls.  Lent is almost over.  Let us use the coming week to follow the example of St. Mary of Egypt, and of all the saints, in becoming more truly human in God’s image and likeness. Christ did not reject them and He will not reject us, if we come to Him as they did in humble repentance.
Posted by Father Philip LeMasters at 1:05 PM