Finding Healing Through the Humble Faith that Overcomes Shame: Homily for the 21st Sunday After Pentecost and the 7th Sunday of Luke in the Orthodox Church 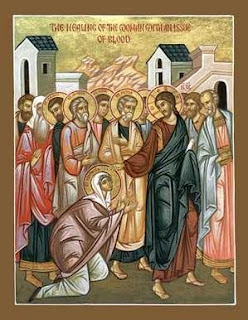 The lives of many people are shattered by the burdens that they carry due to their own sufferings and those of their loved ones.  When those closest to us are troubled, we are troubled also.  When our lives come to revolve around persistent problems that strike at our hearts, it is easy to lose our hope and trust in God.

The woman who had been bleeding for twelve years had spent all her money on physicians who could not heal her.  Because of her condition, she was considered unclean, which meant that she could not enter the Temple or have a normal social life.  Anyone who touched her would also become unclean.  She was chronically ill, impoverished, and isolated.  After twelve years of such problems, it would not have been surprising for her to have lost all hope for the healing of her body and her relationship with others, as well as with God.

Somehow, however, she had both the courage and the faith to reach out and touch the hem of Christ’s garment as He passed through a crowd of people.  She was understandably too embarrassed to walk straight up to the Lord, explain her condition, and ask for His healing.  So she did what she had the strength to do, hoping she could secretly be relieved of her affliction.  When she did that, her bleeding stopped immediately, so she got what she wanted.  But because Jesus Christ is not merely a human being with healing powers but the Son of God, He knew what had happened.  By saying “Who touched me?,” He challenged her to grow in faith by recognizing that the point of this miracle was not simply to get what she wanted.

Instead, He gave her the opportunity to fall down before Him, confess in the hearing of a large crowd what her malady had been, and how she had been healed.  Of course, being put on the spot like that terrified the woman and she trembled with fear.  But through this difficult experience, she was transformed.  Not only her body, but also her soul, were healed.  She died to the damage that came from focusing only on her own problems and the need to protect herself from the rejection and ridicule of others. She was delivered from her shame at not having the life that she understandably wanted.  Shame is a form of pride that holds us captive to the illusion that everything is up to us.  When we cannot accept in humility that there are matters beyond our control and that we cannot solve our own problems, we easily become obsessed with doing all that we can to hide these truths from others and even from ourselves.

This blessed woman was not, however, totally paralyzed by shame, because she had the humility and faith to identify herself publically once she knew that the Lord was aware what had happened.  He did not directly command her to do that, but she knew that was the proper response to His question when “she saw that she was not hidden.”  Her secret was out, at least to the Lord.  The isolating power of embarrassment died in that moment, and she gained the strength and freedom of a truly humble person by telling the whole story in public.  That is when the Savior said to her, “Daughter, your faith has made you well; go in peace.”

With these words, the Lord confirmed that she was no longer defined by her illness or her inability to heal herself.  She had died to her old life as an anonymous outcast suffering from a condition that cut her off from personal relationships with other people and from God.  Through humble faith, she embraced her true identity as a beloved daughter of the Lord who was dependent upon His mercy.  In order to do that, she surely had to muster every ounce of courage in overcoming her fear.  That is how she gained the spiritual clarity to see who she really was before God:  not simply a bundle of medical symptoms or an example of social isolation, but His beloved child and the recipient of His grace.

St. Paul refers in today’s epistle reading to a similar kind of death, for he writes that he “died to the Law, that I might live to God.”  Earlier in his life, Paul had thought that meticulous obedience to the Old Testament law, as interpreted by his fellow Pharisees, put observant Jews in right relationship with God.  But after the Risen Lord appeared to Him on the road to Damascus, Paul became a Christian and ultimately a great champion of God’s mercy extending to all who have humble faith in Jesus Christ.  St. Paul had to die to relying upon whatever righteousness he could earn for himself by legal observance, for that approach could never overcome the power of sin.  He had to die with Christ in baptism to his illusions of earning his own righteousness in order to rise up with the Lord into eternal life.  That is why he says “I have been crucified with Christ; it is no longer I who live, but Christ Who lives in me.”

If we think that we stand before God based on whether we perfectly obey a law simply by our own ability, we may easily become slaves to shame and guilt because we will never be at peace with how we never measure up to what we think God requires.  We will likely view Him as a harsh, impersonal judge who is eager to condemn and reject us.  We will likely become obsessed with how unclean we are before Him, and perhaps do all that we can to hide the truth of our corruption from others and even from ourselves.  We may become as miserable and isolated as the woman with the flow of blood.  Recognizing that some things are simply beyond our control can be quite scary.

The good news is that Jesus Christ taught us to view God as “Our Father.”  Through Him, we are not anonymous defendants before a court of law or individuals simply on our own, but beloved sons and daughters.  As much as I hope that we all love our own parents, they are not the models for our understanding of the Heavenly Father.  It is the other way round, for Christ has shown us the Father.  Recall the parable of the prodigal son, in which the father eagerly awaits the return of his wretched son and restores him fully to the household with great joy.  How sad it would have been if the self-absorbed shame of that young man had kept him from returning home to a right relationship with his father.  He was blessed by his father’s mercy well beyond anything that he deserved or could have achieved.

In Christ, we are all sons and daughters of such an outrageously merciful Father in heaven.  It will be tragic if any of us allows our problems, or those of our loved ones, to keep us from responding to His mercy with humble faith.   Shame or embarrassment that keeps us from doing so reflects the pride of not accepting the truth about who are in relation to Him.  It is impossible to earn the status of son or daughter, for that is a gift based on a relationship initiated by parents.  Christ calls us not to either measure up or run away in shame, but humbly to open even our deepest and most painful wounds to Him for healing with the recognition that we are not our own saviors.

That will not mean that every sickness will be cured, all broken relationships will be restored, or that we will simply get what we want.  It will mean, however, that our weaknesses will become opportunities to die to the misery that comes from the self-centered perspective that we relate to God and other people only in terms of what we achieve, earn, or deserve.  It will mean that, if we have only the faith to touch the hem of His garment, Christ will enable us to grow in the humble trust of sons and daughters for their Heavenly Father.  It will mean that He will grant us the strength to see that literally nothing other than our own refusal can keep us from knowing the holy joy of His beloved children.  As the woman healed from the flow of blood demonstrates, His healing mercy calls us to die to our pride, shame, and self-reliance. That is how we too will find healing for the deepest pains of our lives.

Posted by Father Philip LeMasters at 5:33 AM