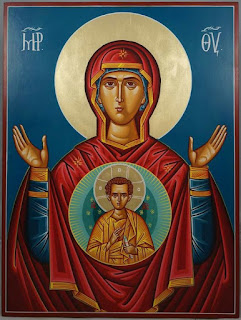 It is always easier to identify other people’s weaknesses than to take a close look at our own.  That is primarily because of our pride, our addiction to self-centeredness that makes us not want to give up whatever exalted illusions about ourselves have taken root in our souls.  It is perhaps the most subtle of temptations, for we can become proud even of how well we think that we confess and repent of our sins.

St. Paul blasted the pride of the factions in Corinth by reminding them what a true apostle looked like.  Instead of basking in religious glory, true servants of the Lord looked like fools, weak and dishonored by earthly standards.  Just think for a moment about St. Paul’s life, from his astounding conversion to Christianity to his constant suffering for the Church and ultimately his death as a martyr.  He must have appeared insane to most people in his time and place.  But it was because of the true humility of putting faithfulness to Jesus Christ first in his life that St. Paul could say with integrity to the Corinthians that they should imitate him.

In our gospel reading today, the Lord challenged the wounded pride of the disciples, who were disappointed that they had lacked the spiritual authority to cast out the demon and heal the boy.  Imagine how humbling it must have been for them to hear the Messiah say, “O faithless and perverse generation, how long am I to be with you?  How long am I to bear with you?”  He set them straight by saying that they had no faith, not even as much as a tiny mustard seed.  Instead of wondering why they could not work miracles, they needed to humble themselves through prayer and fasting if they were to be transfigured such that they would gain authority over the powers of evil.

As we conclude our celebration of the Transfiguration of the Lord today, our Scripture readings remind us of the dangers of presuming that we already shine brightly with the light of Christ.   Too often we assume that success according to some worldly standard is the same thing as holiness.  But when we take a close look at the lives of the saints, we do not see merely a good life according to passing cultural expectations of whatever kind.  Instead, we see people who embody humility in ways that should make us all earnestly confess and repent of our pride.

Since we are preparing through fasting to celebrate the Feast of the Dormition of the Mother of God, it is especially fitting today to remember her extraordinary example of humility and obedience.  The Theotokos agreed to become the Virgin Mother of the Son of God, something that made absolutely no sense according to normal ways of thinking in our world.  She became His Temple in a unique way when Christ was in her womb, and then she loved and served Him throughout His life and ministry, including through His death and resurrection. She is the first and model Christian.  At the end of the Mother of God’s earthly life, the Apostles were miraculously assembled in her presence. St. Thomas, however, arrived three days late.  When her tomb was opened for him to pay his last respects, her body was not there.  Even as she was the first to accept Christ into her life, she was the first to follow Him as a whole, complete person into the Kingdom of Heaven.  She leads the way for us as Christians in this world and in the world to come.

We pray and fast in preparation for the Feast of the Dormition because we want to become more like her.   There is surely no better way to become transfigured by the gracious divine energies of our Savior than to imitate His Mother.  She grew up in purity in the Temple at Jerusalem, where she was fed by angels.  She is the epitome of the prayer and fasting that the Lord said His disciples needed in order to open themselves to His divine power.  That is how she developed the spiritual clarity and strength to say “yes” to the astounding message that she was to become the Virgin Mother of the Son of God.  Of course, her story makes no sense according to the conventional standards of the world.  Even more so than St. Paul, the Theotokos is a “fool for Christ’s sake” because many people then, as now, scoff at her virgin conception of the Savior.   The same is surely true about the miraculous characteristics of her Dormition.

The question that we all face is whether we will proudly cling to our own illusions about ourselves and our place in the world as we stand before the holy mystery of Jesus Christ, the Son of God Who shines eternally with brilliant light that we do not yet have the eyes behold.  His glory is not yet obvious to us.  That is why it requires faith to fall before Him in humble repentance as we open ourselves to His gracious healing power from the depths of our souls through prayer and fasting.

In order to turn away from self-centeredness to Christ-centeredness, we must become fools who devote time and energy each day to commune with a Lord we do not see with our eyes in the world as we know it.  So we must pray.  We must go against society’s expectations and our own desires by regularly refusing to indulge our taste buds and stomachs with the richest and most satisfying foods. In other words, we must fast.   We must act in ways that will appear crazy in the eyes of many people today, such as reserving sexual intimacy only for marriage as blessed in the Church and refusing to consume pornography or any other media or entertainment that inflames our passions.  We must give generously to the poor, forgive our enemies, welcome the stranger, and refuse to allow stupid distinctions between people—such as politics or race-- to keep us from treating every human being—from the womb to the tomb-- as one created in God’s image and likeness.  No matter what may be popular or appealing, we must sacrifice to live as those being transfigured in holiness by God’s grace.

We must come to terms with the fact that doing so is never easy and will always be a struggle.  There is much in all of us that prefers the darkness of sin to the light of holiness.  We would often rather be miserable in prideful isolation than embrace the healing mercy of Christ in humility.  We would often prefer forms of religion accommodated to worldly success and well-being than to the kind of sacrificial obedience that we see in the Theotokos, St. Paul, and all the saints.  But at the end of the day, we have to decide whether we would rather be part of a “faithless and perverse generation” that cowers in fearful weakness before the corruptions of evil in our lives or like the young Palestinian Jewish girl who changed the history of the universe by bravely saying “yes” to a calling that seemed, and still seems, insane by the standards of the corrupt world.

Let us conclude our celebration of the Transfiguration by opening ourselves to the strength and holiness of our Savior, which shone so brightly throughout the life of the Theotokos.  In order to do that, we must humbly focus on uniting ourselves to Christ as we disregard temptations to self-centeredness in any form and to worrying about the conventional wisdom of our society.  If we want, by God’s grace, to shine with holy light, we must first become fools who, through prayer and fasting, simply want to love and serve our Lord with every ounce of our being.  In other words, we need to become like His Mother, the first and model Christian who has shown us how to welcome the Savior into our lives and to follow Him into the glory of the heavenly Kingdom.  Remember this:  To follow her example is to be transfigured.