The Cross and the New Creation: Homily for the Sunday Before the Elevation of the Holy Cross and the After-feast of the Nativity of the Theotokos in the Orthodox Church 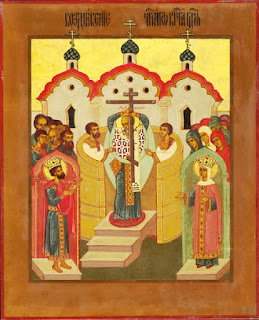 One of the most dangerous temptations that we can face is to despair, to give up hope that we and those we love will ever be any different than we are today.  Too many of us have abandoned hope for anything but more of the same.  Sometimes we justify that in the name of a false humility that says nothing more could be expected of broken, imperfect people like us.  But when we do so, we turn away from the joy of the new creation that our Lord has brought to the world through His cross.

If there were ever a couple tempted not to have hope, it would have been Joachim and Anna, an elderly Jewish couple with no children.  In a faith that began with the promise that Abraham would be the father of a multitude, that was a real problem.  But God heard their fervent prayer and gave them a daughter named Mary, who became the Living Temple of the Lord when she freely agreed to become the virgin mother of the Son of God.  Through this New Eve, the New Adam came into the world in order to free us from the corruption and fear of death and to bring life even from the tomb.

Ever since our first parents became slaves to corruption, every generation had repeated the cycle of life leading to death. But across the generations of the Hebrew people, God prepared the way for the coming of the One who would destroy death by His cross and resurrection.  Like Abraham and Sarah, Joachim and Anna were miraculously blessed by a child in old age, perhaps in part to make clear that God was mercifully doing something new, not simply calling them to continue life as they had always known it.  With the birth of the Theotokos, the Living Temple arrives through whom Christ brings us into the “new creation” of His salvation, the “eighth day” of the heavenly kingdom.  As the Savior said to Nicodemus, He did not come to condemn the creation, but to save it.

In today’s epistle text, St. Paul refutes the Judaizers who required Gentile converts to be circumcised and obey dietary and other laws in order to become Christians.  He saw the danger in those requirements, for obedience to law does not bring us into the life of God or make us participants in the new creation of His Kingdom.  Following rules simply by our own power may make us more religious, moral, or civilized, but it does not make us “partakers of the divine nature.”  (2 Pet. 1:4) Our problems are not so slight that we simply need a few more instructions in order to be set right.  No, we need to be born anew into eternal life, which is possible only through the One who conquered death through His cross.

The Judaizers wanted Gentile converts to obey the law of Moses, in which Nicodemus was an expert as a Pharisee.  But Christ made clear His superiority to Moses by saying “No one has ascended into heaven but He who descended from heaven, the Son of man.”  Moses received the law and beheld the glory of God, but only Christ is the God-Man who came down from heaven and ascended in glory after His resurrection. The Lord referred to a miracle worked through Moses when the Hebrews were saved from poisonous snake bites by looking at a bronze serpent that he held up for them to see. (Numbers 21:9) The people were saved through Moses from physical death on a particular day, but Christ—who will be lifted up upon the cross at His crucifixion-- will give eternal life to those who believe in Him.

As blessed a prophet as Moses was, he did not bring anyone into the fullness of the new creation.  Only Jesus Christ is able to do that.  He is so unique that we cannot talk about Him simply in terms of ideas, laws, or doctrines.  Instead, we speak of profound realities such as birth, death, creation, and resurrection.   We bring to mind outrageously shocking events such as barren senior citizens having babies and a holy virgin who becomes pregnant with the Son of God in her womb.  We see the One who spoke the universe into existence born in the humility of a barn with a manger for His crib.  We see Him rejected, despised, and killed as He offers Himself in free obedience on the cross.  “Behold the Lamb of God who takes away the sin of the world.”  (John 1:29) And then we see the strangest thing of all when He rises in glory after three days in the tomb, bursting the bonds of Hades and defeating even death itself.  That is what a new creation looks like, and it is anything but life as usual.

As hard as it is to believe, the Savior enables us to participate in the new life of the heavenly kingdom even as we live and breathe in this world.  To be in Him is to be set free from the fear of death, from slavery to sin, and from domination by our disordered desires, including the obsession with making ourselves worthy by our own accomplishments.  Unfortunately, many of us remain addicts to self-justification, to the impossible task of saving ourselves from shame, anxiety, and despair by an outward show of respectability or success.  Whether it is religion, work, money, physical appearance, family or anything else, that kind of self-justification is ultimately the idolatry of worshiping ourselves, of glorying in our own flesh, as St. Paul said of the Judaizers.   He wrote, “But far be it from me to glory except in the cross of our Lord Jesus Christ, by which the world has been crucified to me and I to the world.”

Christ’s cross is the end of all human attempts at self-justification, including of any form of religion that sees salvation as just another human achievement.  Our problem is too grave to be solved by an outward show of piety, ethics, or anything else.  The glory to which we are called is too sublime to be fulfilled even by our best efforts.  It is beyond us to conquer death and shine with divine light simply by trying really hard.  That is a path to worry, failure, and fanaticism, not to the peace, joy, and holiness of the Lord.  Like St. Paul, we must die to our addiction to self-justification if we are to understand the infinite love of the God-Man who offered Himself on the cross and endured the wages of sin in order to conquer death on our behalf and for our salvation.  He died that we might live.  He went into the tomb and Hades in order to bring us into the new creation, the “eighth day” of His heavenly kingdom.

We will not secure the meaning and purpose of our lives by self-reliance or maintaining an impressive outward appearance in any way.  Instead, we must become like Joachim and Anna in their patient trust in God to bless them.  We must become like the Theotokos, their long-awaited daughter, who welcomed Christ into her life in a unique way as His Living Temple.  We must become like St. Paul in dying to everything that keeps us from entrusting our lives fully to the mercy of our crucified and risen Lord.  Following their examples, let us all embrace as fully as possible the new life that He has brought to the world.  For that is truly what we all need:  a new life; a new birth; and a new creation.  Those who worship the false gods of the world may be able to achieve certain goals, but they will miss the one thing needful that we cannot give ourselves. As Christ said to Nicodemus, “For God so loved the world that He gave His only Son, that whoever believes in Him should not perish but have eternal life.  For God sent His Son into the world, not to condemn the world, but that the world might be saved through Him.”
Posted by Father Philip LeMasters at 5:05 PM