On Teaching Protestants About Saints, Icons, and Theosis 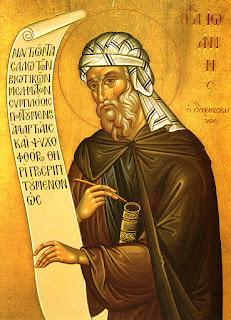 Having taught college-level Religion classes for 25 years now, I have known for a long time that it can be a challenge for students from any faith background to interpret fairly the beliefs and practices of other communities.  In my experience, that is especially the case for many evangelical Protestants when they encounter just about anything that looks “too Catholic.”  Having grown up a Southern Baptist in Texas and having taught now for over 20 years at a Methodist-related institution, I have not been surprised to have students who seem allergic to practices they identify with the abuses of Rome as rejected by the Protestant Reformation.  This semester’s students in my Orthodox Theology course have helped me grow in my understanding of how to address these dynamics with a bit more clarity.

As they were reading St. John of Damascus’ treatises in defense of the holy icons, some of my students took objection to his claim that the Saints are due honor because they partake by grace in the divine glory.  An implication of that claim is that to refuse to honor the Saints is to refuse also to give proper glory to God, for it is His glory in which the Saints participate.  How, then, could any Christian fail to honor those who shine with holy light?  Some students suggested that to honor the icons of Saints, to ask for their prayers, and to remember them liturgically puts people at risk of worshiping the Saints instead of God, of committing idolatry.  In response, I explained that Orthodoxy formally distinguishes between veneration and worship and that there is so much in the life of the Church, and in the spiritual formation of Orthodox believers, to guard against such abuses.  They remained skeptical, however.

It occurred to me a few days after that class that the students were probably thinking about what they imagine would happen if the veneration of Saints and icons were all of a sudden made part of the Methodist congregations in which they worship.  As is perfectly understandable, they were thinking in light of their own experience.  And since the theological sensibilities of Protestantism developed over against the abuses of the Catholic Church in the 16th century, how could they not be suspicious of restoring practices that the Reformers rejected and that are essentially unknown in their communities?

As well, it clicked that Orthodox veneration of the Saints manifests belief in theosis, that human beings become participants in the divine energies like an iron left in the fire.  They shine with the divine glory as they become holy through their participation in the life of the Holy Trinity by grace.  From its origins, the Church has glorified God by celebrating those in whom we have experienced His holiness.  They show us what it means for people, every bit as human as we are, to be so united with the New Adam that they become living icons of the fulfillment of our nature as those created in God’s image and likeness.  Since Orthodoxy is clear about the radical difference between worship and veneration, there is no threat of idolatry here.  Likewise, the iconoclasts challenged the experience of the Church from her origins.  They were the innovators, insisting that what they did not like be ripped out of the life of the Body of Christ, irrespective of the scandal and harm caused to the people of God.

The next time that class met, I urged my students to remember that St. John of Damascus was speaking in and to a Church with well-established understandings of theosis, of the difference between worship and veneration, and centuries of experience in honoring and asking for the prayers of the Saints.  He was not addressing Protestants with no concept of deification.  He was not addressing communities that had refused to venerate the Saints for five hundred years, that had identified that practice with later abuses in the West, or that had affirmed sola scriptura.  My students may make of these matters what they will, but I suggested that it is probably not helpful to reduce the issue simply to speculation on what would happen if they started venerating Saints tomorrow in their own congregations.

Instead, they would do well to wrestle with their relationship to the “great cloud of witnesses” in Hebrews 12 that inspires us to look to Christ as we continue the race.  There is no competition between honoring those holy people and worshipping the Lord in that passage.  They would benefit from engaging the status of the martyrs described in Revelation 6 and the reference to the prayers of the Saints rising with incense in Revelation 8.  In other words, their traditions should encourage them to engage the Bible on these matters, including the miracles worked by the bones of Elisha in the Old Testament (2 Kings 13:21) and the shadow, handkerchiefs, and aprons of the Apostles in the New Testament (Acts 5:15, 19:12).  Since Protestants are supposed to judge tradition by Scripture, they should consider whether their traditions have done justice to the teachings of the Bible on these matters.   Some of my former students have become Orthodox as a result of wrestling with such questions, but what they do with my suggestions is ultimately up to them.

Enthusiastic veneration of the Saints and their icons did not break out spontaneously that day in class, but I could tell that the students were open to seeing these matters in a new light, and not in a way that is entirely captive to their own experience.  That is surely one of the most important dimensions of higher education.   Maybe there is some point to what I have had the blessing to do now for 25 years.
Posted by Father Philip LeMasters at 12:15 PM