Humility and Mercy as Opposed to Condemnation: An Eastern Orthodox Interpretation of Pope Francis' Comments on Whether to Judge Gay People 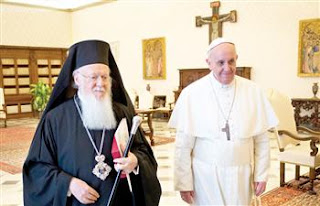 It has been interesting to see all the attention given to Pope Francis’  “Who am I to judge?” comment on how he responds to gay people.  His reaction indicates that it is one thing to maintain Christianity’s historical—and apparently unanimous at least before the 1960’s—teaching that physical intimacy between persons of the same sex is sinful and quite another to judge particular people as though “we” are the sheep and “they” are the goats.  Jesus Christ was very clear that His followers were not to judge others.  He warned that they would be judged by the same standard they applied to their neighbors.  No, putting oneself in the place of God is never an especially good idea.

As a priest of the Orthodox Church, I am not the judge of anyone and strive to concern myself chiefly with my own sins.  Even when I hear confessions, I do so not as a judge in a legal sense, but as an advocate for the healing of my parishioners.  Sins are not so much legal offenses to be judged as self-inflicted wounds for which we need therapy if we are to recover from their ill effects.  Priests apply the disciplinary canons of the Church pastorally and prayerfully for the healing of the soul of a particular person at a particular point in his or her recovery.  The priest is an unworthy icon of Christ and His salvation to the penitent. That is a very different role from being a self-appointed judge with the authority to impose a penalty.  When it comes to sin, we do not need more penalties, but forgiveness and transformation.  The priest is there to heal, not to pronounce a sentence.
The spirituality of the Jesus Prayer is at the heart of our faith: “Lord Jesus Christ, Son of God, have mercy on me, a sinner.” Orthodoxy is not fundamentally about moralism or judging anyone by a legal standard.  Indeed, we are not the judges even of ourselves; that’s God’s business.  But we are all sinners in need of the Savior’s mercy and grace if we are to find healing for the myriad ways in which we have diminished ourselves as those created in the divine image and likeness.  That is why pious Orthodox go to confession regularly to be assured of the Lord’s forgiveness and to receive guidance on how to gain strength in holiness in relation to their particular challenges and spiritual maladies. People confess sexual sins in confession, as they do other sins.  Spiritual fathers provide guidance for healing in relation to whatever sins are named and do not assume that sexual inclinations are necessarily the defining issues of one’s life.  One step in the healing of many penitents is to place sexual passions in the larger context of the vocation to holiness and not in the driver’s seat of one’s identity.
Barring the truly extraordinary case of a scandal in the parish that has to be addressed for the salvation of all concerned, Orthodox clergy should come nowhere near judging others for anything.  For example, when I learn through the media that someone has been convicted even of murder, I do not know the person’s heart or repentance or how the Lord will judge him at the last day.  After all, King David was a man after God’s own heart and the good thief followed Christ into paradise.  If someone I know celebrates greed, disregard of the poor, racist attitudes, or the love of violence, I pray for them and am concerned for their well-being, but that is not the same as judging them as though I am God and they are simply sinners.  No matter what people reveal about their inclinations, relationships, and activities, condemning them personally is simply not the business of any Christian.
At the same time, it is the business of Christians to maintain the teachings and practices of the historic faith, including the reservation of intimate relations to marriage between one man and one woman.  Orthodox Christianity knows of no other form of sexual union that is blessed by the Lord and a path to holiness. Anything else is a distortion of the calling of man and woman to find salvation together in God.  To speak the truth about these matters is not to judge particular people, but instead to invite everyone to follow paths that have and continue to make saints. Those not called to marriage have other paths to sainthood through celibacy, which may be pursued either through the monastic life or an unmarried life in the world.  None of these paths is easy, but they all provide countless opportunities to fight our passions, love our neighbors, and take up our crosses as we follow Jesus Christ.
Contrary to increasingly popular opinion, to remain faithful to basic Christian teaching on these matters is not to fall into the self-righteous judgment of others or to have irrational obsessions or fears about sexual inclinations of any kind.  It is instead to maintain the clear teaching of the Body of Christ since its origins, as displayed in the Scriptures, liturgy, canon law, and lives of the saints. So I agree with Pope Francis, “who am I to judge” any particular person as though I am God?  But at the same time, faithful priests must point their spiritual children to paths that lead to the healing of the soul, regardless of what sins they confess.  That is simply a matter of truth-telling toward the end of a person’s salvation and growth in holiness. And it is also what I want when I go to confession.


So to sum up:  We look to the Church for healing, not a legal sentence.  When spiritual fathers and mothers help us stumble along a path that leads to greater freedom from the control of the passions in any area of life, we grow personally in the knowledge that Christ came to heal and save, not to judge and condemn.  That is the good news of the Gospel to us all, regardless of what our temptations or inclinations may be in any area of life.
Posted by Father Philip LeMasters at 11:36 AM