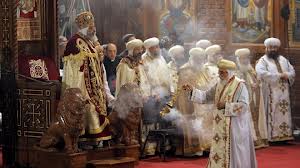 GIZA, Egypt — Egypt’s Christians were worried about their safety on Monday as they marked the first Christmas under Islamist rule, with Coptic Pope Tawadros II urging worshipers “not to be afraid” and some complaining that their lives had gone from bad to worse in the nearly two years since the ouster of Hosni Mubarak.

At St. Mary’s Church in the dense and religiously mixed neighborhood of Imbaba, where sectarian clashes have flared before, midnight Mass on Christmas Eve started early because of safety concerns. The church, which was torched by an Islamist mob in 2011, was protected Sunday by a larger police presence than in past years, a si! gnal to some that the Islamist government wanted to avoid trouble after political clashes flared last month on Egypt’s streets.

Many Christians, who make up roughly 10 percent of Egypt’s 85 million people, have joined with liberals in complaining that the country’s new constitution<http://www.washingtonpost.com/world/middle_east/egypt-ratifies-islamist-backed-constitution/2012/12/25/06625aa4-4ec0-11e2-950a-7863a013264b_story.html>, ratified last month, sets the stage for a broader implementation of Islamic law. Although Copts had complained of marginalization and discrimination under Mubarak, many accuse President Mohamed Morsi and his Muslim Brotherhood allies of hijacking the country and seeking to exclude Christians entirely.

But some Christians said Egypt’s tumultuous transition also has rendered a long-silent community more politicized. With parliamentary elections expected in a few months, they say they are ! going to keep pushing for their rights to counter the Islamist! s’ ris e.

The confrontation last month between Islamists and Egypt’s fractured liberal opposition over the character of the new constitution drew scores of Christian protesters.

It wasn’t the first time that the Copts had demonstrated against Egypt’s emerging status quo. Hundreds of protesters camped in downtown Cairo after a wave of sectarian clashes<http://www.bbc.co.uk/news/world-middle-east-15235212> in 2011, but now many say they have felt emboldened by the vastness of the emerging opposition.

“The Muslim Brotherhood may have forced the constitution on the people, but they will not be able to force Egypt to stay silent,” said Mena Girgis, a 22-year-old university student and activist. “I don’t think they can come close to the Christians at the moment. They’re worried about their reputation to the world — that it will be even shakier than it was before.”

In his Mass, Tawadros appealed for unity but also told congregants, “Even if humans feel lots of fear, remember, God will take care of you. This is a collective message because fear is contagious. . . . This is a message of reassurance.”

Egypt’s military claimed on its Facebook page Monday that its troops had foiled an attempted church bombing<http://www.washingtonpost.com/world/middle_east/egyptian-military-says-it-foiled-car-bombing-near-church-and-military-camp-close-to-gaza/2013/01/07/014e9ebc-58b9-11e2-b8b2-0d18a64c8dfa_story.html> near the country’s border with the Gaza Strip on Sunday night. But it was not clear from local media reports whether a car found laden with guns and ammu! nition in the restive border town of Rafah had meant to target! an unus ed church or whether it may have been directed at a military base, both located nearby.

At St. Mary’s, where memories of mob violence are still fresh, Christmas Eve Mass ended early “to ensure that people get home safely,” said Youssef al-Qumos, a pathologist and churchgoer.

The most violent sectarian clashes of the past two years occurred during the period of military rule after Mubarak’s ouster — and, in one instance, at the hands of the armed forces. But for many, Islamist rule spells far deeper conflicts on the horizon.

Rising Islamism has spurred tense exchanges and sporadic violence in mixed communities across Egypt in recent months. “Even those who have nothing to do with anything are growing beards now,” said Magdy, a Christian bureaucrat in the village of Sanhour in rural Fayoum province.

The residents of Sanhour have been luckier than those of some other towns south of Cairo, Magdy added, because they have yet to see an attack ! on Christians. But he declined to give his last name for fear of reprisal. “Any word spoken by a Christian is judged,” he said. “It’s calm here. But it’s the future that we worry about.”

Last week, fundamentalist Islamists known as Salafists re-published old fatwas warning Muslims against fraternizing with Christians on their holiday. A shadowy Salafist group in the city of Suez vowed to shut down any New Year celebrations. And rumors of a grass-roots Salafist morality force that is planning to mob churches and force conversions have put many Christians on edge.

“They repeated that on a lot of satellite channels, and we don’t know if it’s true or false,” Nahed Adly, a dentist in Cairo who attended Mass at St. Mary’s, said of the rumors.

“My reading is that they’re waiting till the election, till they get everything. And when they’re done taking over all the seats of power, then they can focus on us,” she said.

Ingy Hassieb and Sharaf al-Hourani in Cairo contributed to this report.

By Shahira Amin, Special to CNN

(CNN)– It's Orthodox Christmas, but the mood in Cairo's working-class Shobra district this year is somber. There aren't many colorful festivities and decorations that traditionally mar! k Easter n Christmas celebrations in this predominantly Christian neighborhood, and Shobra's Coptic Christian residents say they are in no mood to celebrate.

Growing concerns about the rights of Egypt's Copts, who make up an estimated 12% of the population, have dampened the mood of Christians, overshadowing this year's celebrations.

"Many of my friends and relatives have left the country," said 27-year-old Beshoy Ragheb. "I would leave, too, if I had a place to go."

Threats by Muslim extremists against Coptic Christians in the past year have forced scores of Christian families to flee their homes in Dahshur and the Egyptian border town of Rafah. Meanwhile, extremist attacks on Christian churches and brutal attacks by security and military forces on Christian protesters demanding the protection of their churches in October 2011 remain vivid in the memories of many of Egypt's Christians.

Military sources, meanwhile, said Monday that Egyptian security forces had thwarted a militant attack on a church in Rafah the previous nig! ht. The would-be assailants fled after a military patrol spott! ed their unlicensed vehicles parked outside the town's Orthodox Christian church, which militants torched weeks after the January 2011 uprising. Soldiers found weapons in one of the vehicles and presume the escaped militants were planning to use them in their attack.

Egypt's Christians are also concerned about the country's newly drafted constitution, which was written by an Islamist-dominated assembly. Liberal opposition political forces say the charter, which passed last month after being put to a popular vote, undermines religious freedoms and does not guarantee equal rights for Copts, despite an article in the constitution that says Muslims, Christians and Jews have a right to practice their religions freely. Church members on the constituent assembly, which was elected by parliamen! t to draft the constitution, walked out weeks before the completion of the draft document, citing concerns about articles they said "contradict the principles of citizenship."

In a recent interview with the Turkish news agency Anadolu, the newly elected Orthodox Christian patriarch, Pope Tawadros II, said that while Christians accept Article 2 of the constitution, which says the principles of Islamic Sharia law are the main source of legislation, they are worried about an article that spells out what those principles are in Islamic terms. "This new provision makes the constitution unrepresentative of the whole society," he said.

Despite the C! opts' in creasing fears, it's not all doom and gloom for Egypt's Christians. A new law on houses of worship is under discussion in the Shura Council - the upper house of parliament, which recently has taken over legislation until the new People's Assembly, or lower house, is elected next month. Once passed, the new legislation will allow Christians to build and renovate their churches as stipulated by the constitution, a far cry from the days of toppled President Hosni Mubarak, when building and restoring churches required a presidential decree.

Moreover, in a recent meeting with Coptic clerics, President Mohamed Morsy promised to approve a unified law on personal affairs of non-Muslims. The law, which was drafted by the late Pope Shenouda III and is now under study, would allow Egyptian! Christians to refer to their own religious edicts in matters such as marriage, divorce and inheritance, and would allow them to choose their religious clerics.

Copts however, complain of continued discrimination. "Copts were grossly underrepresented in parliament and in government under Mubarak. They continue to be discriminated against under Islamist President Mohamed Morsy, despite promises that he would be the president for all Egyptians," Coptic lawyer Nabil Ghabriel said.

The Islamist-dominated Cabinet has just one Christian woman - Nadia Zachary, who was appointed as ministe! r of state for scientific research - and Copts continue to hav! e little more than a token presence in the government. Moreover, Samir Morcos, the sole Coptic presidential aide, resigned in November to protest the sweeping powers that Morsy gave himself in a controversial constitutional declaration. Morcos said he was not consulted about the widely criticized declaration.

Pope Tawadros has urged political parties to place Copts, women and youth revolutionaries at the top of their electoral lists in upcoming elections in a bid to give them adequate representation in parliament. He has also proposed allocating specific constituencies for Christians - a suggestion that Islamists are likely to reject.

Addressing the Christian faithful at the traditional Christmas Eve Mass on Sunday, Tawadros asked the congregation "to pray for Egypt." But he denied that Egyptian Copts are facing a crisis, reminding Christians that sectarian incidents had sporadically occurred in the country during the three decades of Mubarak's rule.

While the pope sounded an optimistic note, saying he anticipates a better future for Egypt, many Christians attending the prayers said they did not share his optimism. "The fact that President Morsy did not attend the Mass himself, but sent a government official to represent him, is a sign that little will change," Hani Tadros, 43, said as he left the cathedral in Abbasiya after attending the prayers.


Posted by Father Philip LeMasters at 9:26 AM