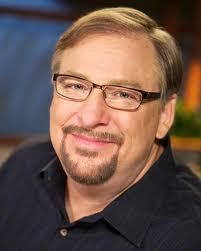 Time reports that the members of Rick Warren’s Saddleback Church have lost over a quarter of a million pounds on “The Daniel Plan.”  After becoming exhausted from baptizing hundreds of hefty parishioners in a few hours, the pastor found inspiration in the Old Testament story of Daniel and the Jewish youths who refused the rich food of Nebuchadnezzar’s table and instead subsisted on vegetables and water.  Warren now encourages congregants to follow a “diet of 70% unprocessed fruits and vegetables and 30% lean protein, whole grains, and starchy vegetables.”[1]  Saddleback sponsors exercise classes, nutrition training, athletics, and small- group sessions.  At least 15,000 participate in the program.
In our increasingly obese and out-of-shape culture, the rise of the Daniel Plan is surely a good thing.  Though Warren apparently doesn’t promote the program as a form of fasting or a way of fighting gluttony, he does promote stewardship of one’s body and health.  As a T-shirt worn by many participants reads, “God created it/Jesus died for it/The Holy Spirit lives in it/Shouldn’t you take care of it?”[2]  Given the “I’ll fly away” Gnosticism of so much popular American Christianity, it’s refreshing to see megachurch evangelicals embracing an often neglected teaching of ancient Christianity.  Namely, our bodies really are holy and called to share in God’s salvation here and now, as well as eternally.  In light of the Incarnation, there is nothing profane or religiously irrelevant about anything physical.  Our Lord has  united Himself with every dimension of human existence—body, soul, and spirit—and has ascended into heaven as an embodied, glorified human being who is also God.  He calls us to become living icons of the divine glory even as we live, breathe, eat, and drink.
Eastern Christianity prizes the spiritual discipline of fasting from the richest and most satisfying foods as a way of humbling ourselves before God and of learning to resist self-centered desires.  Sin came into the world in relation to Adam and Eve’s distorted relationship with food, and most of us have followed their example of treating our taste buds and stomachs as false gods.   So we need some discipline, some restraint, in order to heal our unhealthy relationship with the great blessings of food and drink, as well as with other sources of pleasure.   There is a saying in the Orthodox Church that gluttony is the mother of adultery.  When we get in the habit of satisfying our self-centered desires, we find it hard ever to control ourselves.
The unpopular truth is that Christians need to fast in order to learn to live eucharistically.   To be in communion with the Lord, we must offer every dimension of our lives to Him.  That’s a form of fasting in and of itself, for our usual inclination is simply to serve ourselves.  But to participate in the Heavenly Banquet, we have to put our usual self-addiction aside and create space for the Lord to bring us, including our bodies, into His life.  For those not in the habit of fasting, something like the Daniel Plan sounds like a good place to start.