Homily for Fourth Sunday after Pentecost and Sts. Cosmas and Damian 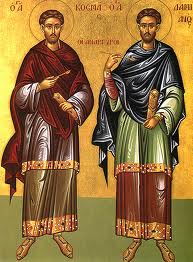 Matthew 8: 5-13
I Cor. 12:27-13:8
So much in our world today seems to boil down to money and power.  So many will sacrifice everything for those false gods.  But today we are reminded that God’s ways are not our ways, that His love, mercy, and blessing are not the prisoners of the false boundaries that we have constructed between  ourselves and others—and between ourselves and Him.    That was shocking news to the Jews of first century Palestine and it still challenges us all today.
In the time and place of Jesus Christ’s earthly ministry, most people wanted to limit God’s salvation to their own kind, to those who were part of their group.  They wanted a savior, a messiah, who would be a regular earthly ruler who would free their land from the control of the pagan Romans.  And the Romans believed that their gods protected their empire.  By the end of the first century, they persecuted Christians who would not worship the gods of the Rome because they were considered traitors who would not do their part to serve the empire.  And they crucified the Lord as though he were a rebel, one who challenged the authority of Caesar.  That’s why the sign at the top of the cross identified Him as the King of the Jews.  The Romans used His death to remind the Jews what would happen to anyone who dared question their authority.
So imagine how strange it must have seemed to everyone when a Roman centurion asked Jesus Christ to heal his sick servant.  A centurion was a Roman soldier with a hundred men under his authority, but this centurion had so much humility that he knew immediately that he was not worthy that Christ should enter his home.  And he had so much faith that he knew that the Lord didn’t need to enter into order to heal his servant.  “Only speak a word, and my servant will be healed,” the man said.  Our Savior marveled at his faith, which surpassed that of anyone in Israel, of any of the Jews.  This humble, faithful Gentile, this hated foreigner, was a sign that “many will come from the east and the west, (from all over the world), and sit down with Abraham, Isaac, and Jacob in the kingdom of heaven.”

In other words, this gospel passage shows that God’s promises to Abraham and his family from the Old Testament apply to everyone with faith in Jesus Christ.  He is the Messiah of the Jews in Whom God’s promises are extended also to the Gentiles, to the entire world, to all people regardless of nationality or culture.  That is how a Roman centurion became the model of faith, the great example of a hated foreigner who will join in the heavenly banquet with the saints of the Hebrew people.


His story reminds us that, in Christ Jesus, the petty distinctions we make between ourselves and others do not matter very much; indeed, they are irrelevant in the Kingdom of God.  For as we see in the Lord’s encounter with the Roman centurion, true humility and faith are not the exclusive possessions of any nation or race.  People from all over the world will enter God’s Kingdom not because of the passport they hold, but because they have become participants by grace in the eternal life of the Holy Trinity.
We also commemorate today Sts. Comas and Damian, the unmercenary healers and martyrs.  They provided medical care free of charge to their patients; and if that weren’t miraculous enough in itself, God also worked healing miracles through them.  The Lord certainly did not charge for healing and these saints continued that ministry by extending His mercy, love, and blessing to the sick regardless of whether they were rich or poor.  Their care was a sign of His gracious salvation that extends to all.

As we all know, it’s a temptation to prize wealth and power in ways that separate us from God and one another.  At the time of our Lord’s earthly ministry, the Jews commonly assumed that rich people were wealthy because they were holy.  Likewise, they assumed that the poor were in need as punishment for their sins.  Christ and His apostles challenged these assumptions on many occasions by word and deed.  In fact, it was often the lowly who responded most readily to the Lord’s teaching, perhaps because they had no illusions about their self-importance or righteousness.    And the Church has canonized as saints the unmercentary healers who became living icons of the humble, selfless love of Christ in restoring the sick to health with no regard to financial resources.  Since they received freely the blessing of the Lord, they gave freely to others.  They paid it forward, you might say.

Today we remember that our Savior challenges all the earthly distinctions that we have created in order to build ourselves up and put others town.  The division between Jew and Greek, between Hebrew and Roman,  between rich and poor, between strong and weak, are broken down in Jesus Christ.  The same is true for the national, ethnic, and political distinctions that divide people today.  Did you notice that Christ did not call upon the centurion to take on a new political affiliation, resign from the Roman army, or become a Jew?  Instead, He simply praised the faith of that humble man, healed his servant, and used the occasion as an opportunity to prophesy that many foreigners will join the great patriarchs of the Old Testament in the Kingdom of heaven, while many Jews will be excluded.

And that was truly an amazing and shocking thing to say.  Don’t forget that the centurion was an officer in the army that occupied our Lord’s homeland.  Contrary to what everyone expected from a Jewish Messiah, Jesus Christ apparently had nothing against him on that account.  He was not concerned with kicking out foreign invaders.  He did not treat the centurion as an enemy soldier to be defeated or a political foe to be overthrown, but instead as a child of God with faith superior to that of His own people.  For Jesus Christ is not a tribal deity only concerned with those of a certain land or background.  He is the second Adam Who heals our common corruption and conquers death, which is the wages of sin for all human beings. The blessings of life eternal are available in Christ to all who have the humility and faith shown by that most unlikely believer, the Roman centurion.

And if we are truly faithful to the Lord, we may not claim Him only for ourselves and those like us.  Instead, we will manifest His love, mercy, and blessing to all by how we welcome and serve them, and how we speak and think of them, regardless of their nationality, race, wealth, poverty, or anything else.  We encounter Christ in every person we meet, for all human beings are created in His image.   How we treat “the least of these” is how we treat Him.  He does not limit His mercy to those who deserve it and neither should we.


It is so easy to judge and divide others according to the corrupt standards of our world, which usually boil down to money and power in one form or another; but that is certainly not what the Lord did in how he responded to the Centurion.   In ways that surely shocked everyone, He saw faith and humility in a hated foreigner that surpassed those of His own people.  The challenge to us is to follow His example and that of the holy mercenaries, fighting the temptation to make God in our image and to limit His mercy to those whom we think deserve it for some reason.  The challenge is to reflect, to convey, to make present the same grace and love that we have freely received to those whom we encounter each day without exception, no matter who they are.
So with mindfulness and repentance, let us learn to view everyone—even those whom we find it hard to love or even tolerate-- as someone called to sit down with Abraham, Isaac, and Jacob in the Kingdom of Heaven. Let us live as those who know the undeserved mercy of God and share His grace with others in how we treat them.  That was the way of the holy unmercenaries Sts. Comas and Damian, and it must be our way if we wish to follow them into eternal life.   We have freely received Christ’s mercy; let us then freely give.

Posted by Father Philip LeMasters at 11:21 AM