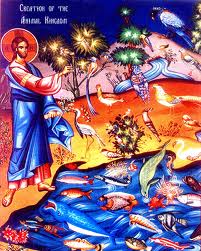 Many Orthodox Christians would  be surprised to learn that their faith calls them to be good stewards of the environment.   We are used to worrying about dishonesty, anger, and adultery, but when we think about the life in Christ, we rarely think of conserving energy, recycling, and composting–or of viewing the world as an icon.   Perhaps that is because we imagine that worship is only about what we do in the church temple.  Or maybe we assume that faithfulness to the Lord is a purely spiritual matter that aims toward escape from the world, not taking care of it.  And if the truth be told, many dismiss any sort of environmental concern out of fear that it would lead them  to question a comfortable, materialistic American lifestyle.  That last one hits a bit too close to home for most of us.


I am on solid ground, however, in writing that stewardship of God’s creation is a fundamental dimension of the Orthodox faith.  One way of showing that is a brief glance at Psalm 104 (103 LXX), which is read at the beginning of every Vespers service.  It describes the glory and goodness of God’s creation, for the Lord has “set the earth on its foundations, so that it should never be shaken.” He has established seas, mountains, and valleys, and provides water and shelter for wild beasts.  The food of the cattle, and our wine and oil, come from the hand of the Creator, Whose bounty extends to mountain goats, badgers, and lions.  “O Lord, how manifold are Thy works.  In wisdom hast Thou made them all.”  These works include even Leviathan, the sea-monster created for the sport of it, merely to play in the oceans.  All these creatures look to God, find life in Him, and die when He removes their breath.  After describing the creation so poignantly, the Psalmist exclaims, “May the glory of the Lord endure forever, may the Lord rejoice in His works...”


Psalm 148 is similar in its call for all the creatures to praise God:


Praise the Lord, all creatures on earth.  Praise Him all creatures from the ocean depths.  Let fire, hail, snow, ice, strong winds obey His word.  The mountains and all the hills, fruitful trees and all cedars, the beasts and all the cattle, creeping things and winged birds, kings of the earth and all people, princes and all the judges of the earth, young men and women, old people and children–all praise the Name of the Lord together, for He alone is worthy of praise, above all other names.

We must remember the place of God’s creation in our salvation.   It is within the world created by God–for there is no other world–that our whole life occurs.  The Son of God entered this world for our salvation, and our life in Christ will be lived in this creation.  We are, of course, part of it.  As Genesis 1 teaches, human beings are the crowning work of creation, and have been assigned from the beginning the role of stewards over the  rest of God’s world.  It should not be surprising, then, that Noah is commanded to preserve from the flood the lives of animals together with those of his family.  The ark is a foreshadowing of our salvation, and harmony with the animals is part of this picture of God’s blessing and protection.


There are many other biblical images of salvation that include animals and the land.  For example, the prophet Isaiah described the Messianic Kingdom as a time when


The wolf also shall dwell with the lamb, the leopard shall lie down with the young goat, the calf and the young lion and the fatling together; and a little child shall lead them.  The cow and the bear shall graze; their young ones shall lie down together; and the lion shall eat straw like the ox.  The nursing child shall play by the cobra’s hole, and the weaned child shall put his hand in to the viper’s den.  They shall not hurt nor destroy in all My holy mountain, for the earth shall be full of the knowledge of the Lord as the waters cover the sea. (Isa. 11: 6-9)

The prophet Amos envisioned God’s Reign as a time when vineyards, gardens, fruit, and wine would be bountiful. (Amos 9:13-14)  The creation itself has borne the consequences of the sin of Adam and Eve.  No longer a peaceful realm for vegetarians, the big critters eat the little critters, and we often like our steak rare. Death, disease, famine, hurricane, earthquake, and other catastrophes threaten us all.  Such pestilence and strife were not God’s original plan for His world.  In His blessed Kingdom, peace and harmony will extend to all God’s creation.  So it is not surprising that the lives of many saints, such as St. Seraphim of Sarov, show “an unusual sympathy and compassion for animals, plants and in general every creature.”1


These Old Testament themes find their fulfillment in the incarnation of Jesus Christ.  The incarnation of the Lord–as fully God and fully human–grounds Orthodoxy’s distinctive view both of the place of human beings in the world and of the world itself.  On the basis of the incarnation, everyone is called to become a priest and an iconographer of creation, offering the world to God so that it may become an epiphany or manifestation of the Kingdom of Heaven. This relationship to the natural world is essential for human beings to fulfill their vocation as those created in the image and according to the likeness of God, and for the world to fulfill its destiny in the working out of salvation.