Born to Fulfill the Hope of the Righteous and to Save Scandalous Sinners: Homily for the Sunday before the Nativity of Christ (The Genealogy) in the Orthodox Church 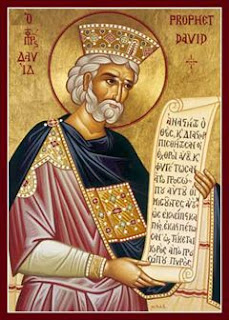 Now that the great feast of Christmas is almost here, the Church directs our attention to the family tree of Jesus Christ. Today’s gospel reading from St. Matthew is our Lord’s genealogy, which traces the Savior’s human ancestry back through many generations to Abraham.  It shows that He has the correct heritage to be the Messiah, the Anointed One in Whom the ancient promises are fulfilled. The great saints of the Old Testament looked forward to the completion of their hope for the fullness of the blessing, which we have now received in Christ.  As our epistle passage from Hebrews states of them, “And all these, though well attested by their faith, did not receive what was promised, since God had foreseen something better for us, that apart from us they should not be made perfect.”

As we prepare to celebrate our Lord’s Nativity, we do well to consider our relationship to the many generations through whom God prepared for His Son to become the God-Man born in Bethlehem.  If we know the stories of the people of the Old Testament, we should know that we have a lot in common with them.  The Bible makes clear that they suffered from the same forms of pain and brokenness that people do today in their families, in social strife and war, and as exiles and refugees.  They often fell short of what God required of them and committed idolatry by worshiping false gods, including their own desires for power and pleasure. Like King David, many sinned greatly and repented greatly.  Even the most righteous of them, however, did not experience the fulfillment of the human person in God’s likeness, for it is only through the God-Man that we are able to become “partakers of the divine nature” by grace.  He alone has healed every dimension of our humanity by becoming one of us.

The Old Testament presents our Lord’s ancestors as unlikely people to prepare the way for the coming of Christ.   For example, not long after God said that He would bless him as the father of a multitude, Abraham gave his wife Sarah away to Pharaoh, encouraging her to say that she was his sister (Gen. 12).  Later, when they were impatient about their inability to conceive, Abraham fathered a child by Sarah’s servant Hagar (Gen. 16). These were not the actions of people with perfect faith.  When God called Moses to lead the Hebrews out of Egypt in the Exodus, he made excuse after excuse to try to get out of it  (Ex. 4). Even after their liberation, the Israelites worshipped a golden calf (Ex. 32) and wanted to go back to Egypt as they complained about the hardships of wandering in the desert (Exod. 16).   That God remained faithful to His promises to the descendants of Abraham was a sign of His mercy, not that the people had earned or deserved any particular blessing.

The family tree of Jesus Christ in today’s gospel reading certainly does not shy away from the scandalous truths about the people of the Old Testament.  The first of the women mentioned in the genealogy is Tamar, who became pregnant by her father-in-law Judah.  A widow, she disguised herself as a prostitute when he would not give her his youngest son in fulfillment of the requirements of levirate marriage (Gen. 38).  Judah, Tamar, and the twins they conceived are listed in the genealogy. The family tree includes Rahab, a Gentile prostitute who protected two Hebrew spies before the conquest of Jericho (Josh. 2).  She is listed as the mother of Boaz, a Jewish man who married Ruth, a Moabite woman, even though the Old Testament clearly prohibited such marriages (Ruth 4). Nonetheless, Boaz and Ruth are listed as David’s great-grandparents.  Then we read that “David was the father of Solomon by the wife of Uriah.”  David had committed adultery with Bathsheeba, who became pregnant, and then had Uriah killed in battle in order to hide what he had done (2 Sam. 11). David composed Psalm 50 (51) as he repented of his great sin.

Matthew’s account of the family tree prepares us for the kind of Savior we encounter in Jesus Christ.  Even as His ancestors sinned, He came to show mercy upon those who had fallen short of fulfilling God’s purposes for them.  Even as His family line included Gentiles, He makes all with faith in Him the heirs of the promise to Abraham.  Even as He is a descendant of many whose lives were scandalous, He brought salvation to the world in a fashion that was shocking and offensive to the religious leaders of His day.

The circumstances of His conception were outrageous, as His teenage virgin mother became pregnant by a miracle of the Holy Spirit.  Joseph, the older man to whom she was betrothed as her guardian, was horrified to find her pregnant.  Knowing that he was not the father, he planned to divorce her quietly, but did not after an angel told him in a dream of the virginal conception of the Savior.  We may have heard this story so many times that we are no longer shocked by it.  It is important to remember, however, that Christ was born in circumstances that were quite scandalous, for the idea of a virginal conception and birth was just as shocking in the first century as it is in ours.

Think for a moment about how our Lord’s ministry was received.  He was charged with being a servant of the devil, a blasphemer, and one who disobeyed God’s commandments.  He showed mercy to Gentiles, tax collectors, prostitutes, and other public sinners and lowly people whom the religious establishment had rejected.  The Pharisees and Sadducees were scandalized by what He taught and did.  For a Messiah to die on a cross was considered an act of complete failure which no one expected.  When the tomb was empty three days later, a different kind of scandal occurred when the Crucified One rose in glory.  In a totally expected and unconventional way, He did what not even the most righteous people of the Old Testament could ever have accomplished, for He overcame death, the wages of sin.

Is it surprising, then, that Church reminds us today both of the great faith of those who looked forward to the coming of the Messiah and of how they often fell short of what God required of them?  No, that is precisely what we should expect, for those great saints were human beings like us, living in a world of corruption as they bore the weight of their own sins and were  weakened by the failings of others.  They did not earn the promise made to Abraham by good behavior, and we have certainly done nothing to merit the merciful love of God that led to the incarnation of the Savior.  Though they did not yet have the fullness of the promise, they suffered greatly in order to be faithful to God and repented greatly when they disobeyed Him.  All the more, then, should we who have received the fullness of the promise unite ourselves to Christ in humble faith, regardless of how profoundly we sin or have sinned at any point in our lives.

Had we needed simply a code of conduct or a great teacher or example for the healing of our souls, the Son of God would never have been born to restore and fulfill us in His image and likeness. The Savior, born in so shocking a fashion at Bethlehem, alone is able to overcome the ultimate scandal of the grave itself, as well as all the ways in which we have diminished ourselves as His living icons.  In the short time remaining before the feast of Christmas, let us all embrace the outrageous blessing that is ours in the Messiah.  He came to save the scandalous sinners of past, present, and future generations, including you and me.   Now is the time to complete our preparation to receive Christ at His birth, for He came to fulfill His gracious purposes for all who bear His image and likeness. Not to be ready for Him would be the greatest scandal of all.