The Struggle to Take Up the Cross: Homily for the Sunday After the Exaltation of the Cross in the Orthodox Church 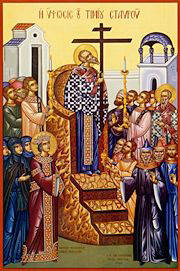