Not Being Ashamed of the Cross: Homily for the Adoration of the Holy Cross (3rd Sunday of Lent) in the Orthodox Church 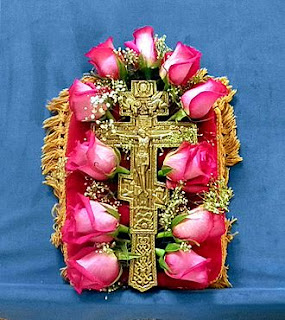 Today we do something that makes no sense at all apart from the resurrection of our Lord, for we adore the Cross on which He died.  The Romans executed traitors on crosses in order to make an example of what happened to people who dared to oppose them.  Death on a cross was a long, painful process in which the victim was helpless before his tormentors and displayed to the world as a pathetic failure by every human standard.  After having been betrayed by Judas, denied three times by Peter, and handed over to the pagan Romans by the corrupt leaders of His own people, the Son of God was nailed to the Cross and left to die.  Had He not risen in glory on the third day, no one would think of it as anything other than a horrible means of death.
Because the Savior freely offered Himself for the salvation of the world on the Cross, we adore it today as a weapon of peace and a trophy invincible, for by the Cross He has conquered death and made us participants in life eternal.  Unlike all the kingdoms and weapons of this world, the Cross alone does not perpetuate our slavery to the fear of death.  It does not invite us to believe that the false gods of power, pleasure, and wealth are our only hope and must be defended at all costs.  It does not promise salvation through the shed blood of our enemies.  No, the Messiah shed His own blood as He entered into death in order to destroy it by rising in glory from Hades and the tomb.  Instead of causing others to suffer, He accepted the horribly painful end of His earthly life for our sake.  And as He died, He even prayed to the Father for the forgiveness of those who killed Him.
Christ had warned His disciples that if they were ashamed of Him, He would be ashamed of them.  He said that as He taught them to take up their own crosses and lose their lives out of faithfulness to Him.  Not to be ashamed of the Savior Who died on the Cross requires that we take up our own crosses as we die to all that separates us from sharing in His eternal, holy life.
Now that we are halfway through Lent, the challenges posed by our spiritual disciplines should have opened our eyes just a bit to how far we still have to go in not being ashamed of our Lord.  We have a long way to go in emptying ourselves out of love for our neighbors, including those that are difficult to love.  We have a long way to go in gaining strength to deny our own desires in order to put the needs of others before our own.  We have a long way to go in putting aside our own pride in order to offer ourselves to Him in free obedience.
Through the Cross, Christ shows us that true life does not come through responding in kind to our enemies or making the protection of our own interests the highest good.  He demonstrates that true power often looks like weakness according to the standards of our corrupt world.  He calls us to destroy the idols we have welcomed into our hearts as we join ourselves to His great Self-offering for our salvation.
In the remaining weeks of Lent, we must stop being ashamed of the Cross in how we live.  We must save our lives by losing them in the service of our Lord and those in whom we encounter Him daily.  We must crucify the passions and habits of thought, word, and deed that keep us enslaved to the fear of death.  As we prepare to follow Him to His Passion by prayer, fasting, generosity to the needy, and forgiveness, we must learn to bear our own crosses, for the only way to life is through dying to the distorting power of sin in our souls.  We do that through humble repentance every time that we gain the strength to say “no” to ourselves in order to say “yes” to God.
There is no way around this uncomfortable truth:  To save our lives, we must lose them.  Instead of being ashamed of the Cross, we must bear witness to the One who offered Himself fully on it for our salvation by how we live each day.  That means to deny ourselves, take up our crosses, and follow Him as we struggle to die to all that would separate us from embracing the blessed, eternal life that the Savior has brought to the world.  There is simply no other way to be a Christian and to prepare ourselves to enter into the holy joy of Pascha.