Embodied Persons, Male and Female: Thoughts on the Body and Personal Identity 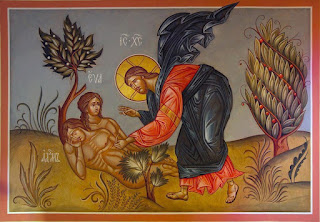 I find it hard to understand why some claim today that it is bigoted and mean-spirited to think that the biological complementarity of males and females provides an important clue to the personal identity of human beings. When someone speaks of men and women, it is certainly reasonable to assume that those terms reflect basic biological realities.  It is hard to see how we may think of mothers, fathers, brothers, sisters, etc., without reference to the physical bodies of those who are male or female.  If we try to do so, we will quickly find ourselves supporting a disembodied view of personhood that presents grave challenges for human dignity and is antithetical to the Christian faith.

“The facts of life” are such that it takes the bodies of two persons of opposite sex to conceive children.  As any physician or scientist will affirm, there are distinctive and biologically defined roles for men and women in this process.  It is also the nature of human beings to inherit physical and other traits from their parents.  In other words, the difference and complementarity of biological males and females stands at the heart of what it means to exist as a human being.
No doubt, throughout human history there have been men and women who would have preferred to have been born as members of the opposite sex.  It is one thing to acknowledge that, but quite another to conclude that their preference means that there is no abiding biological reality to the distinction between males and females.  It is one thing to hope that people who struggle with these issues will find peace in accepting the implications of the physical reality of their bodies for their personal identity.  It is one thing to reach out to them with compassion, as Christians should to all people with profound personal challenges.  It is quite another, however, to say that only vicious, ignorant oppressors would dare to think that someone’s physical body manifests whether that person is a man or a woman.
Granted, there are very rare cases of ambiguous genitalia or persons with a disparity between their chromosomes and the outward structure of their bodies.  Barring those conditions, it is hard to see how someone could even come close to making a coherent claim that he or she is “really” a member of the opposite sex.  Such an assertion would entail that the characteristics of one’s physical body are simply irrelevant to his or her personal identity.  The details of gender roles have varied throughout human history and do vary today in different settings, but the physical distinctions between the anatomy of males and females have remained.  Those who do not recognize that biological sexual identity is an abiding dimension of personal identity have taken a large step away from reality and the broad scope of human experience in the world as we know it.
It is not yet clear how far the agenda of deconstructing maleness and femaleness will go, but to make gender identity simply a matter of subjective self-definition should deeply trouble us all, and especially advocates of the rights and equality of women.  If our society comes to view physical bodies as irrelevant for the definition of who is a woman, then matters involving women’s bodies—such as pregnancy, motherhood, or violence against women-- will be taken even less seriously than they are today.  If a simple declaration by a biological male makes him a woman, then the unique interests and cultural significance of those with female bodies must not matter that much.  Indeed, any claim that male and female bodies are even truly distinctive would become incoherent. The definition of who is a woman would then have no connection with the physical characteristics of the human body; those characteristics would then have only trivial significance.  The less standing the bodies of our neighbors have in our eyes, the less of an obligation we have to help them as embodied persons.  No, this way of thinking is not good news for the orphan, the widow, the stranger, or the rest of us.  The classic feminist phrase “our bodies, ourselves” would be replaced by a dangerously disembodied vision of personhood.
For Christians, the deconstruction of biological sexual identity is yet another manifestation of the ancient heresy of Gnosticism.   We cannot tell the story of the good news of our salvation without referring to biological men and women, for our salvation is the fulfillment of our identity and vocation as those created male and female in God’s image and likeness. (Gen. 1:27)   Just try to make sense of the story of the Hebrew people from generation to generation without such a perspective.  Contrary to those who think that Jesus Christ was uninterested in these matters, He specifically cited our creation as male and female in speaking about marriage. (Matt. 19:4; Mark 10:6)  Against the libertines who thought that what they did with their flesh sexually had no spiritual significance, St. Paul stressed that our bodies are temples of the Holy Spirit that will participate in eternal life.  (1 Cor. 6:12ff.)  Christ’s resurrection manifests God’s gracious intensions to sanctify every dimension of who we are:  body, soul, and spirit.    And since He is the Eternal Word Who spoke the universe into existence, breathed life into us from the dust of the earth, and told us to “be fruitful and multiply” as men and women (Gen. 1:28), it should not be surprising that His salvation is the fulfillment, not the repudiation, of our embodied personhood.


In this light, Christians must show true compassion toward people who struggle with gender identity without encouraging them to adopt self-definitions that ignore the physical realities of human personhood.  Christ invites us to the healing of every dimension of our humanity, which includes embracing the truth about who we are as embodied male or female persons.  For all of us, that is a struggle in one way or another.  Healing comes through the difficult task of offering every dimension of our lives to the Lord in humility.  We become more truly the people He created us to be when we reorient ourselves to Him in body, soul, and spirit. Our faith calls us to give more—not less—attention to the role of our bodies in sharing in the eternal life of the Lord Who made us men and women in His  image and likeness.
Posted by Father Philip LeMasters at 1:57 PM