American Christianity Declines as the Martyrs of the Middle East Bear Powerful Witness to Christ: Homily for the Sunday After the Ascension 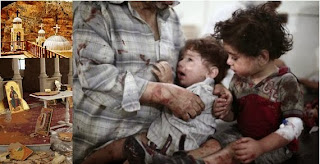 A recent survey of Americans about religion is getting a lot of attention, especially because it shows that fewer people now identify themselves as Christians and more consider themselves unaffiliated with any religion.  Perhaps at least part of the reason for these declines is that many people have not found something worth living and dying for in the churches with which they are familiar.


He calls us to become living icons in ways that attract others to the joy, blessedness, and fulfillment of the Kingdom.  He enables us to live in this world as those who already have experienced its salvation.  He commands us to radiate the divine glory in which He has made us participants.  If we do so, we will bear witness to the truth of the Ascension, and many in our culture will be drawn to our Lord, God, and Savior Jesus Christ for the first time.   And by His grace, they will see that He is the Way, the Truth, and the Life.
Posted by Father Philip LeMasters at 2:34 PM