Jesus Christ Makes Great Saints Out of Even the Worst Sinners:Homily for the 5th Sunday of Great Lent in the Orthodox Church 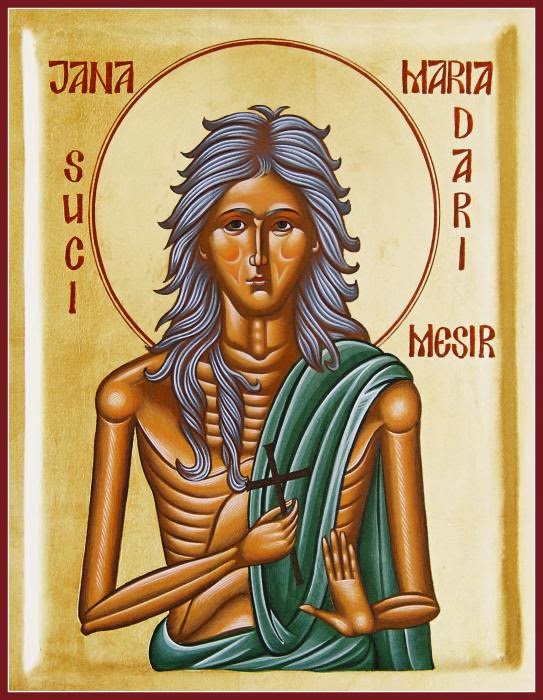 Hebrews 9:11-14
Mark 10:32-45
We have all had the experience of falling short of our own goals, our hopes, and our values.  We have all said, done, and thought the wrong thing on more than one occasion.  We all know what it is to be embarrassed and disappointed about our failings, and to be ashamed to acknowledge what we have done.
So we can imagine how James and John felt when Christ corrected them for asking to be His favorites in the coming Kingdom.  The Lord had just told the disciples that He would suffer and die, but these two disciples would not hear the Lord’s message.  They insisted on thinking in terms of a worldly, political kingdom on this earth, and they wanted really good positions of authority when Jesus Christ came into power, not unlike the politicians of our day.
“You do not know what you are asking,” our Savior said to them.  For to follow Him into the Kingdom will require that they drink the cup and undergo the baptism of suffering and death.  This is the way of complete self-sacrifice for the Kingdom, not of grasping for earthly authority and status. The other disciples were understandably angry when they heard that James and John were jockeying for position, and the Lord reminded the whole group that humble service, not domination, is the way to life eternal.  “For even the Son of Man did not come to be served, but to serve, and to give His life a ransom for many.”  On that day, James and John surely had to face up to their failure to live up to the teaching and example of Jesus Christ, and then to make things right both with the Lord and their fellow disciples.
On this fifth Sunday of Great Lent, we remember St. Mary of Egypt, someone who also came to see that she had fallen short of the Lord’s expectations.  Mary was a nymphomaniac and a prostitute, totally enslaved to her own perverse sexual passions.   Her life was truly an obscene scandal, but everything changed when an invisible force prevented her from entering the Church of the Holy Sepulcher in Jerusalem.  She then asked humbly for the help of the Theotokos , entered the church to venerate the Holy Cross, and obeyed a divine command to spend the rest of her life in repentance and strict asceticism as a hermit in the desert.  When the monk Zosima stumbled upon her almost 50 years later, he was amazed at her holiness.  But like all the saints, she was aware only of her sins and her ongoing need for God’s mercy.
When Mary of Egypt prayed before the icon of the Theotokos, she acknowledged for the first time the sad truth about her life.  She had heard in the past that Jesus Christ came to save sinners, and now she knew that she was one.  And that humble confession was the beginning of a life of such holiness that we devote a Sunday in Lent each year to her memory.  Have you ever noticed that we do not hide repentant sinners in our church? Instead, we put them on icons and sing about them for they are such wonderful examples of the kind of people we hope to become by God’s mercy.
Mary of Egypt, like James and John, had to acknowledge the truth about her failings.  These disciples had wanted only power and she had wanted only pleasure.  But they all eventually accepted the Lord’s correction of their faults and became saints, people whose lives shine brightly with holiness.  As we near the end of Lent, let us follow their example by honestly confessing our sins both in the Sacrament of Confession and in our daily private prayers.  For nothing that we have thought, said, or done is beyond forgiveness by the mercy of Christ.  No damage that we have done to ourselves or others is beyond His healing.  No human being is beyond repentance; and, yes, that includes people like you and me.
So take heart and keep hope alive.  The same Lord who patiently corrected power-hungry disciples and who made a great saint out of a grossly immoral woman has plans for us also.  And they involve a life of righteousness which we will find by repentance, by humbly setting right what has gone wrong in our lives, by accepting His correction and finding healing for the self-inflicted wounds that we all bear.  Yes, in Christ Jesus there is hope for us all, no matter what we have done or left undone.
Now, so near the end of Lent, it is time to get over our pride and embarrassment, our slavery to our self-serving illusions, and to take the medicine of confession and repentance as we  get ready to follow our Savior into the deep mystery of His cross and empty tomb.  He drank that cup because of our sins, and we will only be able to follow Him on that blessed journey if we open ourselves in humility to His merciful healing and strength.

Posted by Father Philip LeMasters at 9:10 AM