Let Us Ascend with the God-Man: Homily for the Feast of the Ascension in the Orthodox Church 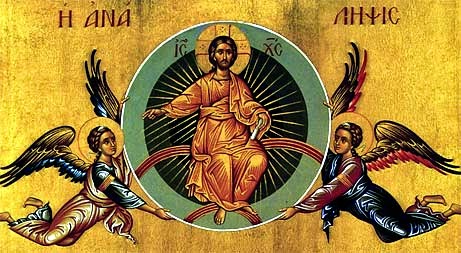 Sometimes we are all set our sights too low, expecting too little of ourselves and others.  We sell ourselves short and do a disservice not only to ourselves but to everyone around us.  When we aim low, we cannot expect to achieve high goals or to become the people God calls us to be.  The season of the Ascension is a powerful antidote to such low expectations, for it reveals the great glory and dignity that Jesus Christ has given us.  Through our Lord’s Ascension, we rise with Him literally to the heights of the heavenly Kingdom.


This is not a message for a few select souls or for people with no problems who seem to have everything in life.  It is good news for us all, no matter how broken, imperfect, and difficult our lives may be.  Christ rose again and ascended with His wounds for our salvation.  He turned death itself into a pathway to eternal life, and He can transform  even our worst struggles and pains into our greater personal participation in the new life of the Kingdom.  No, we cannot do that by ourselves any more than we can raise the dead or rise to heaven by our own power.  But in our ascended Lord, all things are possible.  Were He simply a great human personality kept alive only in our memories, we would have no hope beyond the world as we know it.  But in the God-Man Who conquers death for our sake and deifies our humanity, we may live even now the life of heaven as a foretaste of the eternal peace and joy that are not of this world.  That is what He calls and enables each and every one of us to do through a life of holiness in His Body, the Church.  Yes, He has ascended in glory.  The only question is whether we will follow Him.
Posted by Father Philip LeMasters at 4:49 AM