Light for Those in Darkness: The Good News of the Gospel on the Sunday after Theophany (Epiphany) in the Orthodox Church 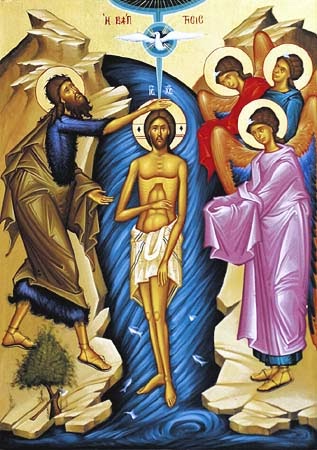 John the Baptist plays a very important role in the season of Epiphany, which we continue to celebrate, because it fell to him to baptize Jesus Christ.  Of course, John did not want to do so because he knew that he was unworthy to baptize the incarnate Son of God.  It should been the other way round.  But in humility, he did what the Lord told Him to do.  And it is in that context that the divinity of our Savior was revealed, as the voice of the Father proclaimed “This is my beloved Son” and the Holy Spirit descended upon Him in the form of a dove.  The Holy Trinity was revealed at Christ’s baptism, and surely even John, the Forerunner and Baptist, was amazed.


We do not have to flee to monasteries or become super pious in order to do that, of course.  Step by step, little by little, we just have to open the darkness in our lives to the Lord.  We can do that right here, right now, regardless of the outward circumstances of our lives.   He has descended into our corrupt life in order to bring us into His eternal glory.  He wants us to become epiphanies or manifestations of the light that shines even from the murky waters of the Jordan.  If, like John the Baptist, we will in humility obey Him as best we can, we can be sure that He will make up what is lacking.  He will illumine us and enable us to be part of that light that is the salvation of the world.  Of course, we are unworthy of such a blessing, which is why our life in Christ is all about mercy and grace which we receive through faith, love, and repentance.  By ourselves, we are as dark as the tomb; but in Christ, we will shine with the light of heaven.  That is the good news that we continue to celebrate in this season of Epiphany.
Posted by Father Philip LeMasters at 1:25 PM