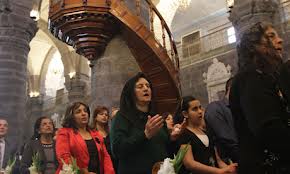 Close to 1,000 Christians, both Greek-Orthodox and Roman Catholic, are trapped in the small village of Yaakoubieh, located in the north of Aleppo. In a report by Fides News Agency, refugees are completely worn out and lack basic necessities, such as food and electricity while dealing with heavy fighting between loyalist forces and opposition groups.

They are unable to leave the village and are in terrible condition, where they risk extinction, said Fr. François Kouseiffi OFM, a Franciscan friar and pastor of the church of San Francesco in Hamra (Beirut) to Fides. Fr. Kouseiffi deals with the care and assistance of about 500 Syrian refugees.

The refugees have reported to Fr. Kouseiffi the plight of the village of Yaakoubieh, and where many of their relatives are. Before the war there were about 3,000 Christians in the village between Armenians, Orthodox and Catholics, and now almost all have fled. In the village there are Franciscan nuns who, says the friar, share the fate of civilians.

The situation is very serious. The faithful are trapped. We are trying in every way to help them to come to Lebanon. In past days, some of our emissaries left to go there, but the journey is dangerous and, after more than a day's journey by land, they reached Aleppo. The contacts with the remaining Christians are sporadic. They launched the alarm for their survival. They risk of dying in the general silence, Fr. Kouseiffi said.

The Syrian Christians are paying the price of the destabilization of the country and suffer like other Syrian citizens but, like other minorities, they are the most vulnerable groups. Out of the approximately four million Syrian refugees, the Syrian Christians are about 500 thousand, 25 thousand of which are in Lebanon. In past days, recalls Fr. Kouseiffi, the wave of frost has made their condition even more difficult: we are in the middle of a humanitarian emergency. They talk about their drama, their hopes, and dreams of a better future for their country.

If you are interested in receiving news from ZENIT, you can subscribe for FREE at this link http://www.zenit.org/spanish/subscribe.html

ZENIT is an international news agency.
Visit us at:
http://www.zenit.org

Posted by Father Philip LeMasters at 10:39 AM