Sometimes It's Best to Stay at Home: Homily for the 20th Sunday After Pentecost in the Orthodox Church 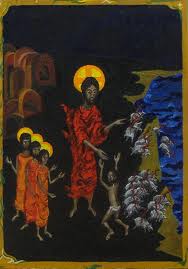