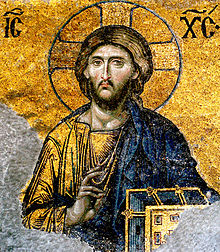 This posting is a revised excerpt from “Orthodox Perspectives on Peace, War, and Nonviolence,”
The Ecumenical Review March 2011 (63/1):  54-61.
Orthodox moral theology does not view war as unambiguously good, let alone holy; but neither does it require nonviolence or pacifism of the faithful.[1]  The Church tolerates war as a tragically necessary or unavoidable endeavor for the protection of the innocent, the vindication of justice, and the establishment of peace.  The soldier who kills in war is not a murderer, but likely someone in need of pastoral ministry toward healing from the damaging spiritual effects of the use of deadly force.[2]
Through oeconomia, the Church’s canons are applied pastorally in order to help particular people find spiritual healing and advance in holiness. The peace of Christ--and the non-resistant, forgiving love by which He brought salvation to the world—remains the norm of the Christian life.  Unfortunately, the peace of the world as we know it relies on imperfect arrangements of political, social, economic, and military power, which both reflect and often contribute to the brokenness of human souls and communities. Orthodoxy calls everyone to work toward peace, reconciliation, and justice for their neighbors.   When doing so requires involvement in warfare, the Church provides spiritual therapy for healing and guidance for growth in holiness to those who take up arms.
The Divine Liturgy demonstrates the legitimate role of governmental and military power in our world.  In the Anaphora of St. Basil the Great, the priest prays for God to “be mindful…of all civil authorities and of our armed forces; grant them a secure and lasting peace…that we in their tranquility may lead a calm and peaceful life in all reverence and godliness.”  Immediately following are similar appeals for God to “be mindful” of the victims of violence and oppression:  “those who are under judgment, in the mines, in exile, in bitter servitude, in every tribulation, necessity and danger…”
These petitions indicate that the Church itself benefits from a stable and just social order that enables the Christian community to live in peace.  Of course, the Church has endured terrible periods of persecution from wicked governments with remarkable faithfulness; nonetheless, “a calm and peaceful life in all reverence and godliness” is preferable to all-consuming strife that inflames passions, tempts people to apostasy, and makes the demands of communal survival so pressing that evangelism and other ministries suffer greatly.  It is at least in part through just and peaceable social orders that God is mindful of prisoners, exiles, refugees, victims of crime, and other displaced and marginalized persons.
The Church affirms the essential goodness of all dimensions of creation, including the embodied social existence of humanity.  Salvation is not a matter of escaping the limits of the creaturely world or pretending that suffering in the flesh and in society is not real.  The Son of God became incarnate to heal fallen humanity, died on a cross, was buried in a tomb, descended to Hades, and then rose again as a complete, glorified
Person--as the Victor over death. As Orthodox Christians pursue a dynamic praxis of peace, they do well not to downplay the significance of real-life struggles for justice faced by nations and societies in the name of an abstract spirituality.
Orthodoxy views all dimensions of creation eucharistically.  The offering of the Divine Liturgy is the paradigm for human life in the world as we fulfill our vocation as the priests of creation.[3]  Bread and wine become the Body and Blood of Christ through which the Church participates already in the heavenly banquet of the Kingdom of God.  Communicants are then to live the Eucharist by offering all aspects of their lives to the Father in union with the sacrifice of the Son by the power of the Holy Spirit. Such a life should be characterized by peacemaking, forgiveness, and reconciliation; a non-violent approach surely provides the most straightforward witness to the life of Kingdom as revealed in Jesus Christ.[4]   Nonetheless, the process of theosis is dynamic and open to everyone in all walks of life and vocations; hence, the soldier, the police officer, and others involved in the use of deadly force for the protection of the innocent may grow in holiness and find salvation.  They do not fight holy wars and will not become saints simply due to their success in killing enemies. [5]  Their participation in violence may produce a variety of obstacles for their faithful pursuit of the Christian life.  They will need the spiritual therapies of the Church in order to find healing for their souls from the harms they have suffered.  But as the many saints from military backgrounds indicate, it is possible for soldiers to overcome the damaging effects of bloodshed and to embody holiness.  Fr. John McGuckin notes that “most of the soldier saints…went voluntarily to their deaths, as passion-bearers, or martyrs; and some of them were actually martyred for refusing to obey their military superiors.”  Those who returned home as “righteous vindicators” did so because they conquered not only a worldly enemy, but also “the very chaos and wickedness” of warfare and bloodshed.[6]
Orthodox moral theology does not view armed conflict as unambiguously good or holy.  It has neither a crusade ethic nor an explicit just-war theory.  Instead, the Church tolerates war as an inevitable, tragic necessity for the protection of the innocent and the vindication of justice.  Peacemaking is the common vocation of all Christians, but the pursuit of peace in a corrupt world at times requires the use of force.  In such circumstances, the Church provides spiritual therapy for healing from the damaging effects of taking life.  In every Divine Liturgy, the Church prays for the peace of the world and all its inhabitants, and participates in the heavenly banquet of the Kingdom to which all—soldier and pacifist alike—are invited by their Lord.